Android devices are more vulnerable to attacks, and you must have at least one best antivirus for Android or All in one mobile security app on your smartphone. There are Antivirus for Android mobile like 360 Security, capable of providing mobile security in all aspects like Android Antitheft protection, Intruder selfie, malware protection, Android photo lock, Android phone locator, etc. Every smartphone user is a target for the malware and defrauds to steal personal information from the phone user.

Look at the 10 best Android antiviruses with Antitheft Protection that may help you to retrieve your device in case you lost. 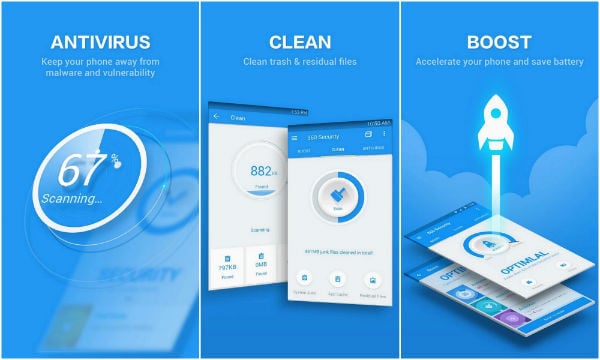 Security 360 app is one of the best antivirus for Android, offer real-time protection for Android device, which can boost the speed of Android, disable running apps to avoid battery draining, clean RAM to improve performance, protect Android from malware, vulnerabilities, adware, and Trojans. 360 Security Antivirus offers an anti-theft solution that can Alarm, Locate, Lock and even Erase Android device if lost. The privacy protection can lock apps like SMS, photo albums, and other private documents.

Related: Best 7 Free Apps to Lock your WhatsApp and Facebook on Android

DFNDR, best Android antivirus powered with antimalware and anti-hacker features. Doubling up as a cell phone locator and Android phone tracker, DFNDR is there to protect your device by preserving Android phone battery power. According to the company, the app daily blocks more than 2 million online threats. 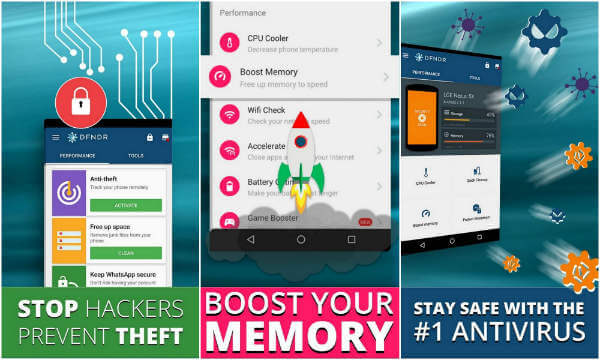 The mobile security app comes with Phone Booster to clean your device for increasing its performance. DFNDR prevents any person to power down the device in the presence of screen block and can take intruder selfie too. You can also clear all the multimedia files on WhatsApp through the app with a single click. With this Android security app, you can scan for viruses take advantage of spyware removal feature with antitheft security service.

Kaspersky Antivirus & Security is a free antivirus for Android phones. The company is known for their desktop and laptop antivirus. As per the AV-Test, the app has the best score for detecting malware and providing the best security for Android. 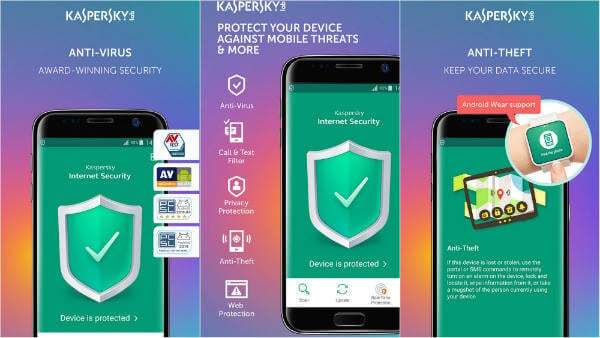 The app also doubles up as an Android phone tracker aiding in knowing the device’s location. No ads are present in the app, and it blocks the unwanted calls and messages. This Antivirus for Android can block any visit to dangerous sites and links while using the internet. This Android security app safeguard all the apps & files you download and protect vulnerable personal information.

Lookout Security & Antivirus is simple to set up and its intuitive interface makes it easy to use. The antivirus is entirely dedicated to make your mobile secure and completely protect it from the threats surrounding. 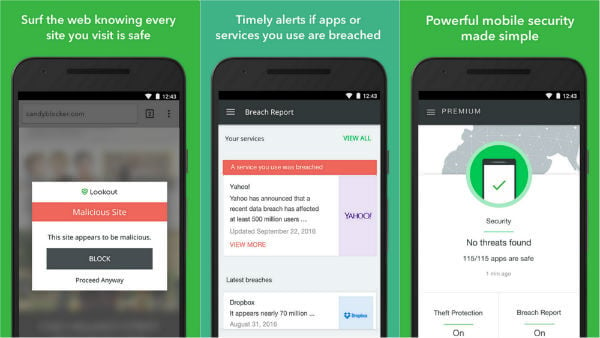 This security Android app comes with the feature that automatically scans the device whenever a new app is being installed. Schedule a scan when you reach a particular place, time or day. You can also get timely alerts when any organization, application, and service perform a data breach. This Android security all-in-one app protects Android device, data, and offers identity theft protection. Lookout is available as a 14-day trial free initially.

Whenever an antivirus is searched for PC or laptop, the name of ESET is taken with utmost grace. Many consider this as the lightweight and one of the best Android antivirus. 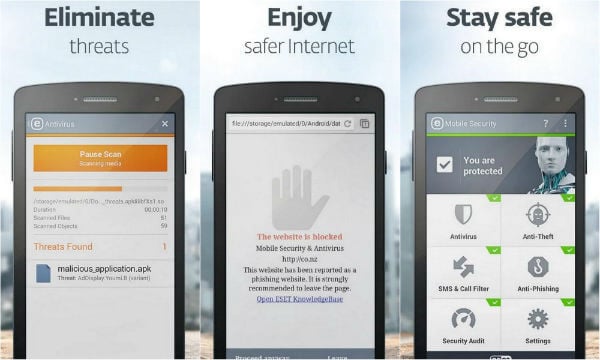 ESET antivirus sends the current location of the device to my.eset.com when the device is on low battery. The device will enter the suspicious state when there is an unauthorized SIM change done. In the case of a missing device, the app will list the IP addresses to which it was connected to locate it. The additional features include on-demand security scan, downloaded file scan, Anti-Theft with Remote Lock, Alarm, and GPS Localization. The premium security features for Android includes SMS/MMS/Call blocking, Device setting change Monitoring, Application Audit etc. The app gives all premium feature free in its 30-day trial like cell phone locator and Android phone tracker etc.

McAfee Security & Power Booster is one of the most awarded and feature-rich antivirus for Android users. The tagline of the app ‘The Ultimate Protection for Your Mobile Life’ says all. Protecting about 150 million devices worldwide. 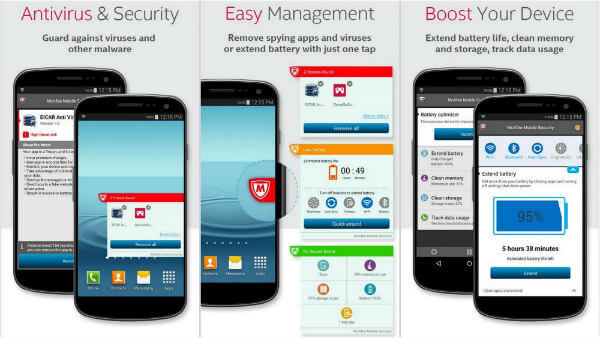 The Android security app inherits uninstall protection that makes sure that no other person deletes it from the device. McAfee security cleanup your unwanted clogging of memory and protect Android device from insecure Wi-Fi networks. This antivirus app scans for malicious code from files, SMS, SD card, and downloads. This security app can estimate the remaining battery life, free up RAM, monitor data usage, lock sensitive apps and takes a snapshot of the person holding your lost device.

Give your Android device a robust protection with Trustgo Antivirus app. The Antivirus app matches the scanned apps from the database of the trusted application approved by the company. 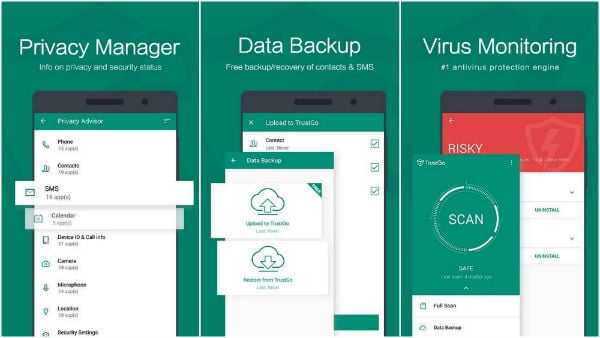 This antivirus for Android free supports multiple languages and helps to uninstall the unnecessary apps from Android. TrustGo protects Android device from system vulnerabilities and privacy risks. This Android antivirus designed to backup local data with one touch.

With more than 100 million installs on Android, Avast Mobile Security is one of the best Android antivirus. Secure your device against fraudulent attacks coming from various sources, and the app is there for you every time. Easily use the app through its understandable user interface to protect the device. Many claim Avast as their best bet due to being so powerful in the desktop version. 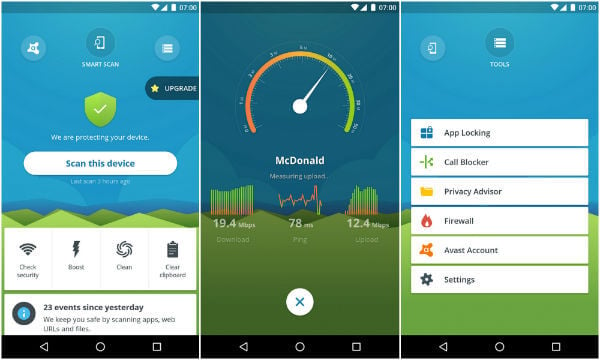 You can easily see that which apps is working under what app permissions. The user can easily clean the items present in the clipboard through the app. Avast also delivers you the speed of the Wi-Fi by showing your download and upload speeds.

The Bitdefender Mobile Security & Antivirus is a reliable antivirus for Android phones free. Bitdefender malware scanner has proven with 100% detection rate and is always up to date with the latest intel on viruses. 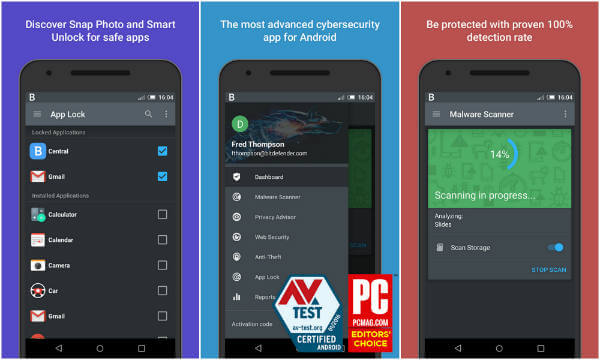 This Android security provides app lock with a PIN and the protection extends to the smartwatch that alerts you when you are too far from the phone. The Antitheft protection can lock, geo-locate, alarm, and wipe lost Android from any Internet-connected device. This app lets you hear lost phone conversation, send SMS commands and alert when thief change SIM. In beginning, the users have a 14-day free trial. After the trial period, the user has to subscribe to it.

This list of Android protection will not complete without this powerful Antitheft Android App. Cerberus is one of the best Android Anti-Theft apps to protect your device, that performs even better with rooted devices. The Android Anti-Theft app offers remote control options via SMS (text messages) from another phone, or through the Cerberus website. 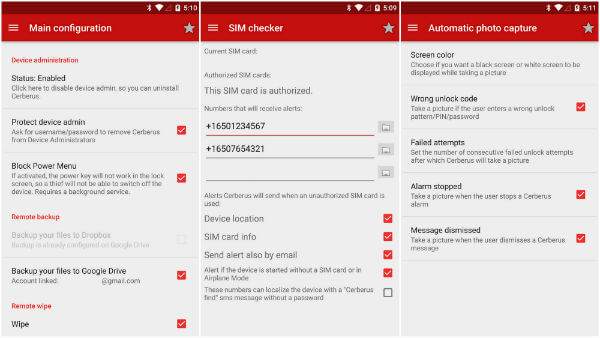 We are depending on Smartphones to check the bank balance, pay credit card and private chat, social media upload, etc. In the present time, these activities are under the radar of the people who want to take benefit from it. Here is the ultimate list of best available mobile security and Android antivirus app for your smartphone. These apps are feature rich and powerful to extend maximum security for your Android devices. These apps like 360 Security are best to provide Antitheft protection, Intruder selfie, photo lock, phone locator, app lock and tons of other security features.

How to Create A System Restore Point on Windows 10