Here are some of the best GNOME themes for Ubuntu Linux or any other Linux distro using GNOME. 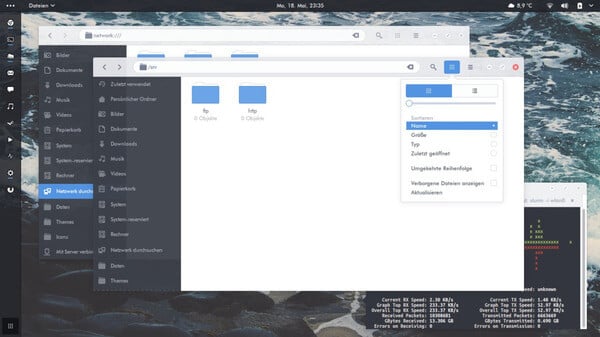 Arc Theme is one of the best and most popular flat themes for Linux. It’s available for almost all major Linux desktop environments including GNOME. The GNOME theme supports GTK 3, GTK 2 and GNOME Shell-based desktop environments like Pantheon, MATE, Budgie, Xfce, etc. The theme officially comes in three different flavors: Arc, Arc-Darker, and Arc-Dark. However, you may find a ton of other Arc inspired themes on the internet. 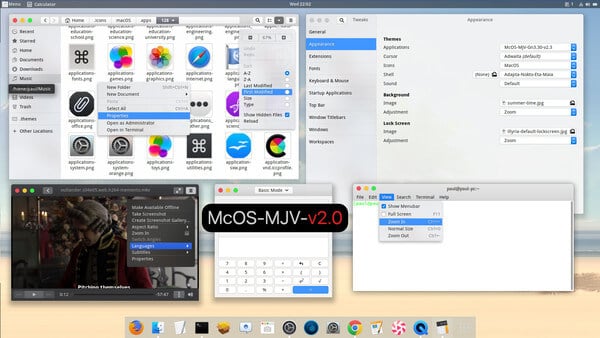 Just like Arc, macOS themes are quite popular on Linux and it’s not surprising. Apple’s software is pretty beautiful to look at. There are many macOS and macOS inspired themes for Ubuntu Linux. However, this Mojave inspired theme by paullinuxthemer is the best amongst the crowd.

It not only replicates the macOS look most accurately but also introduces transparency in certain elements like macOS. paullinuxthemer has also made a ton of other macOS inspired themes that you can check out. 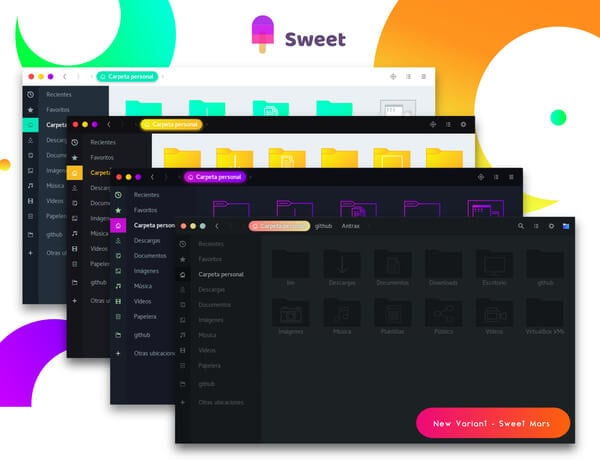 If you like the circular window control buttons on MacOS but don’t really want your ‘Linux’ desktop to look like a MacOS knockoff, Sweet can be a good theme choice. The theme is all about beautiful, colorful gradients. Depending on the variant you pick, you get a light or dark background and a light or dark window header.

The buttons, menu highlights, everything that’s normally painted with the accent color instead is filled with a gradient that just looks nothing like anything else. It’s unique, and it’s pretty.

Also Read: How to Install Flatpak on Ubuntu and Find Flatpak Apps 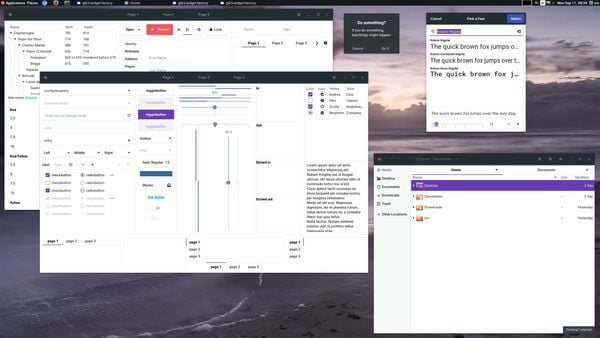 Like Arc, Adapta is another very popular Linux theme across all kinds of desktop environments and Linux distros. Also like Arc, Adapta is widely adopted by many Linux users. With this color pack though not only you get the beautiful Adapta theme but also a choice between so many different accent colors other than the default. In fact, there are 19 colors to choose from.

So if you’re a fan of the flat design language which is quite popular these days you can definitely find a variant you like in this pack. 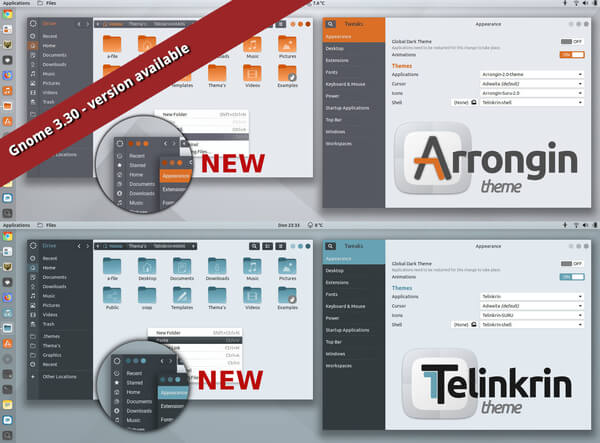 Arrongin and Telinkrin are actually two themes but they’re also the same except the colors. Arrongin is centered around an Ubuntu-esq orange color, while Telinkrin uses a slightly more bbluish-greenor greenish-blue color. It wouldn’t be wrong to consider them as sister themes. They are also relatively new options when it comes to Linux themes. Both the themes take a few notes from Ubuntu’s new ‘Yaru’ theme which is the default theme on Ubuntu 19.04 and above. 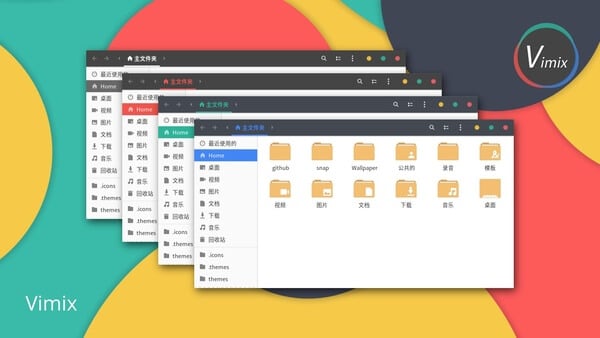 Vimix is another flat theme but it borrows a little from macOS’s red, green, and yellow window buttons without directly copying them. There are a number of different variants to pick from. There are three background color variants: an entirely dark background, white background, and dark header, or an entirely white-ish background.

Each of the three variants is offered in a number of color options which makes the total number of choices pretty high. 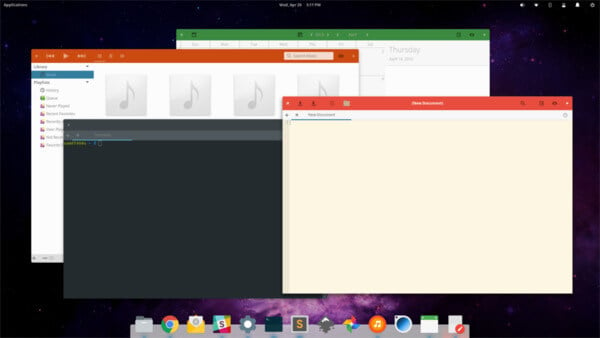 Paper is widely known amongst the Linux community for being the best Linux theme based on Google’s material design guidelines. The theme has been around for quite some time when it brought Linux onto the material design bandwagon everyone else was jumping on. As of now though Paper is probably known more for its material design based icon pack than the GNOME theme.

That doesn’t mean the GNOME theme isn’t good though. If you appreciate material design and the light color choices, Paper might just be the theme you want. 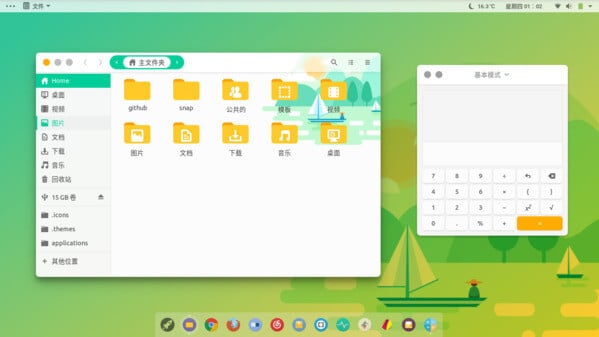 Google has revamped its material design recently and made it a bit more rounded. The old material design, and thus, the Paper theme may, therefore, look a bit dated. Canta, however, is a newer, modern, material design theme that you definitely cannot skip.

It makes use of a beautiful blend of pastel colors with round buttons, tabs, and corners. Moreover, the theme uses subtle, unobtrusive transparency here and there throughout the UI giving your Ubuntu machine a stylish look. There are around 12 variants, including Dark and Light, for GTK+ 3 and GTK+ 2. Canta also supports multiple GTK-based desktop environments apart from GNOME such as Unity, Budgie, Pantheon, Xfce, and MATE. 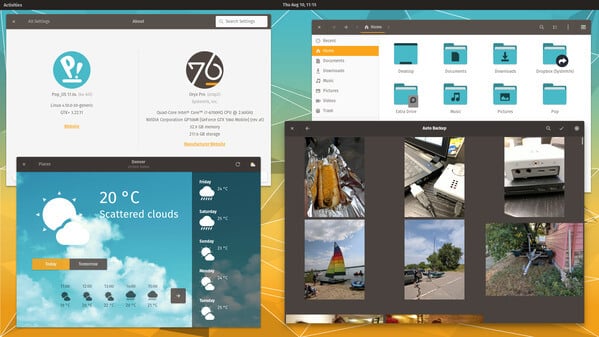 Pop is also a newer theme, although not exactly a new theme. The Pop GTK theme is a fork of Adapta theme listed above. It is developed by the System 76 team and it also comes with its own, matching icon pack. It’s actually made for Pop!_OS which is a Linux distribution developed by the same people that made the theme.

You don’t need Pop!_OS to enjoy the theme though and your regular Ubuntu GNOME desktop will do just fine. It’s a theme with an excellent amount of polish that you should definitely try out.

Related: How to Install Ubuntu 19 from USB & Dual Boot Alongside Windows 10 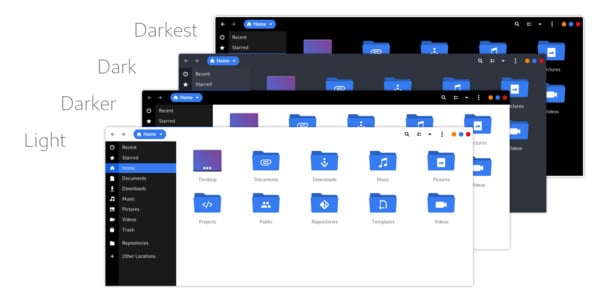 Flat Remix, as the name suggests, borrows elements from all kinds of themes to put together a theme that manages to stand out still. Just look at the close, maximize, and minimize buttons which are clearly inspired by macOS but uses colors that you wouldn’t find elsewhere.

It uses a flat design like Arc and Adapta. In fact, except the window control buttons, the entire theme looks and feels like a cross between Arc and Adapta.

As you can see, the GNOME desktop has no lack of customization options when it comes to themes. Not many people realize though that themes aren’t officially a part of the customization GNOME offers but more of a hack. With so many options available though it doesn’t really feel like an unofficial feature. There are obviously so many themes we couldn’t mention here that you probably like the most.

How to Get Waze Offline on Android and iPhone