How to do Facetime on Android and iPhone?

FaceTime is a great way to communicate with your friends and family members. But the feature has been largely restricted to just Apple devices. The question is, what if you wanted to do FaceTime on Android? Can you facetime on Android? What if you have an iPhone but the person on the other end does have Android? For Android users, Google recently introduced more features on Google Duo, that is supposed to beat Apple’s monopoly on the FaceTime app. Now Google Duo, the facetime app for Android users are available for iPhone too. Both Android and iPhone users are free to do facetime.

Let’s check how FaceTime works and how you can use it on your iPhone as well as Android. I will also cover a few ways to do video calls on Android smartphones or from iPhone to Android and vice versa.

Using FaceTime on the iPhone is pretty straight-forward, as everything else on Apple devices. Launch the app on your iPhone. You will a rather simple interface, black background, with two tabs. Audio and Video. You can also make audio calls using FaceTime.

There is a search bar that you will use to find the person, in your contacts, with whom you want to FaceTime. Click on the person’s profile and hit the video icon to make the call. There are some other options available here too like mail and iMessage. 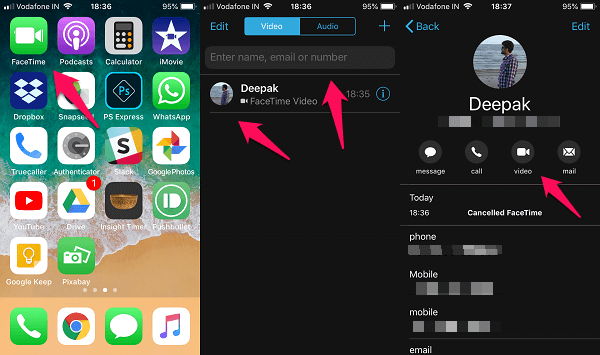 Using FaceTime, you can chat with only one other person at a time. There is no support for group calls as of yet. The all new iOS 12 will allow you to video chat with up to 32 people at once when it is released. However, if you want to do a facetime with Android users, then Apple is not going to help you. Google Duo is the best bet for you.

2. Google Duo for iPhone and Android

Google Duo is Google’s answer to Apple’s FaceTime. Like FaceTime, you can use Duo to chat with anyone who is in your contacts. Also, there is no support for group chats on this FaceTime for Android users. However, Google Duo users can expect the group chat and group calling in upcoming releases. Google FaceTime app comes pre-installed on all Android phones but that is not where Google decided to stop.

You can also install Google Duo on iPhones and iPads which makes it more suitable to do video calls on iPhone in case you have a friend with an Android. More options, similar functionality.

Android FaceTime app has a simple UI just with two buttons. One for making audio calls and the other for video calls. There is a search bar you can use to find the person you want to connect with. There are some additional options available in the Settings area for this Google’s FaceTime app. Let’s see what they are. 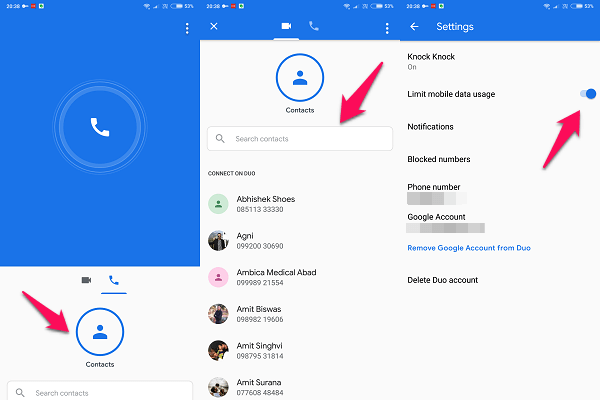 You can limit mobile data usage though that will reduce the video quality a little. You can directly block numbers inside the Duo app to prevent a person from calling you. Handy if you are getting spam calls from your ex!

One useful feature is the Knock Knock. When toggled on, you can see who is calling you before answering the call. The same is also true for others when you are video calling them. Good thing because you can now decide in advance if you want the person on the other end to see you in your pajamas! Helps avoid embarrassing situations when you are working remotely and your boss decides to call you.

Also Read: 10 Best Apps to FaceTime on Android and iPhone?

3. WhatsApp for iPhone and Android

Last in the list, but definitely not the least, is WhatsApp. WhatsApp is the most popular and widely used messaging app in the world. Whether you have an Android or an iPhone, WhatsApp will work to initiate a FaceTime call on Android and iPhone. No matter who you want to video call, chances are that he or she has WhatsApp installed on their phone. 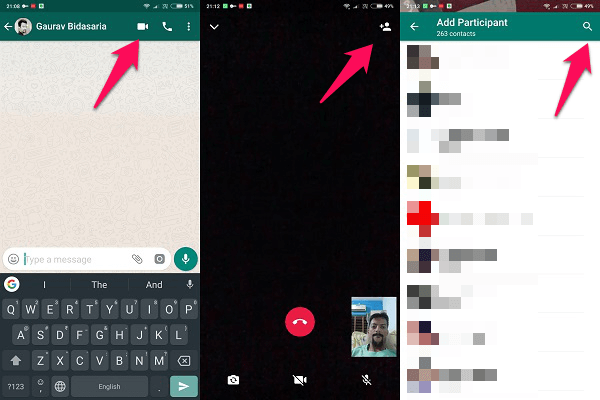 To initiate a video call on WhatsApp, open the chat window for the person first. Click on the video icon at the top to initiate a call. Once the call has been accepted, you can add participants by clicking on the ‘+’ icon at the top right of your screen. Doing so will reveal your WhatsApp contacts with a search bar. Just search and select the name of the person and a video call will be initiated.

WhatsApp seems to be the best way to make video calls so far. Not only is it available on all platforms, but it also supports group video calls with up to 4 people at once. Though iOS will bring group video calls too, Duo won’t. Google named it Duo for a reason I guess.

Given the screen size of the smartphone these days, I believe group video calls is more suitable for 4 to 6 people max. Any more than that and you run the risk of calls getting disconnected due to network load. Also, I am not sure how you are going to see 32 (Apple FaceTime) people on such a small screen. It will ruin the experience.

How to FaceTime on iPhone and Android

While FaceTime is an amazing videotelephony product. FaceTime is largely restricted to the Apple ecosystem and not everyone you know owns an iPhone. In fact, Android market share seems to be bigger as you can also buy cheaper Android smartphones with front-facing cameras.

The FaceTime feature is pretty good because you can make video calls to anybody just with their number or iCloud ID. FaceTime was so popular because of this video calling feature direct to an iOS device number. Google has been made Google’s FaceTime app, Google Duo, that can initiate video calls to any number. This app is more universal, that supports both Android and iOS platform.

If you want something simpler with the ability to see who is calling and how they look before picking up the call, Google Duo is more suitable. The only caveat is lack of group video calls. On the other hand, if you want to make group video calls, WhatsApp seems to be the perfect alternative.

If you and the person you are calling are both using an Apple device, then there is no need for any third party app. Simply use FaceTime to make that video call.

Unable to Set Up Apple AirTag with iPhone (Solved)