Does your old laptop make you want to smash it into a wall? Windows machines don’t age very well. It is something that won’t probably change until Windows is done from scratch. But Windows isn’t the only quality OS in the market. You can’t download Chrome OS and can’t install Chrome OS on your old laptop but you can still make it a Chromebook, sort of.

Chromebooks are quite popular, specifically in the US and Europe. The OS these machines run, i.e., Chrome OS is the center of all the popularity. It makes it possible for Chromebooks to be cheaper than traditional laptops running Windows and they provide a better experience if internet browsing and media consumption are all you want.

While Chrome OS is great and all, you traditionally have to shell out some cash to get your hands on it. Chrome OS isn’t available for download from anywhere and therefore you cannot install Chrome OS on your laptop unless it’s a Chromebook. Google doesn’t allow it to be installed on devices that haven’t been authorized by the company. That’s why you only have a Chromebook when you have a Chromebook.

However, Chrome OS is nothing much but the Chrome browser running on top of the Linux Kernel. Chrome itself is based on the open-source Chromium browser, also by Google. As it does with the browser, Google also maintains an open source version of Chrome OS called Chromium OS. On top of it, Google adds proprietary code o build Chrome OS. A key difference between Chromium OS and Chrome OS is the browser used for the principal user interface. No points for guessing which OS uses which browser. Another key difference is that you cannot download Chrome OS but you can download Chromium OS.

Related: How to Get Google Chrome Dark Mode in Android, Windows 10 & Mac?

Before you can install Chrome OS on your laptop, you will need some preparation: 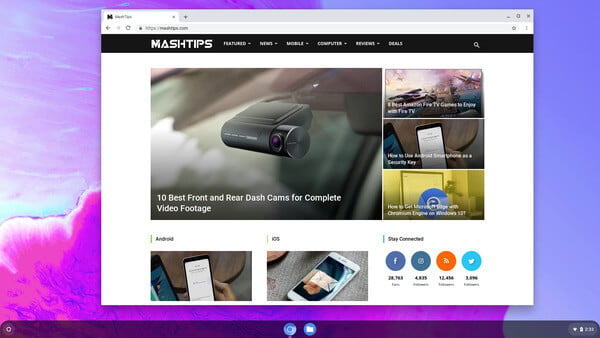 The advantage CloudReady offers is that you can install it on your PC, laptop or MacBook. Being based on Chromium OS, CloudReady is not as resource hungry as Windows, Mac or even a full-blown Linux based OS like Ubuntu. Therefore, installing CloudReady on your old laptop might give it a significant boost and you get the same experience as you’d get if you could install Chrome OS.

Editor’s Note: CloudReady supports almost all kinds of hardware but it doesn’t support every piece of hardware out there. So before you install CloudReady, make sure to boot it from a USB Drive and try it out to see if everything is working.

To create the CloudReady installation USB on MacOS, Linux, or Chrome OS, you’ll actually need the Google Chrome web browser which is already present on Chrome OS. Once Chrome is installed, follow the steps below.

Related: How to Share Link between PC and Mac using Chrome

Once CloudReady is installed on your USB drive, you can install Chrome OS on your PC or Mac. But before you do, it’ll be wise to make sure your hardware is fully compatible.

Related: How to Make Calls Direct from Google Chrome

Fyde OS is another fork of Chromium OS but it originates from China and some people have issues with software originating in China. So if you’re one of those CloudReady might still be your best option. If not, Fyde OS is actually better because it supports Android apps. Neverware has officially stated that they’re not concerned with supporting Android apps on CloudReady. Therefore, CloudReady lacks that one part of the Chrome OS experience.

Fyde OS requires creating a local account on your system instead of a Google account. This means your history, apps, etc. aren’t synced to your Google account. There is a workaround to that which you can easily Google but it requires the use of command line. Fyde OS also has a version with English as the default language called Flint OS. Development on Flint OS, however, has ceased. Thus, you’d be better off if you install Fyde OS instead. 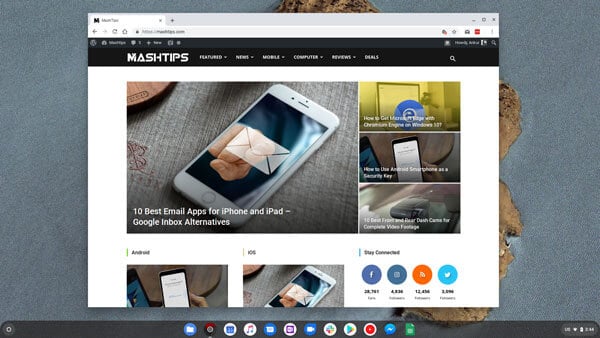 Unlike CloudReady, Fyde OS is completely useable from your USB drive and provides all the storage space left on your USB drive after the OS installation. However, installing it onto the hard drive of your PC is a tad bit difficult in comparison. When you’re done though, Fyde OS is closer to what you’d get if you could install Chrome OS. Well, other than the Chrome icon and Google Sync.

Pull out the USB and reboot your computer one the script has finished installing Fyde OS.

After Netbooks were pretty much dead Chrome OS has revived them again in the form of Chromebooks. Because Chromebooks don’t run the full-blown Windows-like desktop, they’re not just cheap laptops, unlike the netbooks of yesteryear that got thrashed out of the market by the iPad. Chromebooks excel at what they provide, a lightweight, cheap desktop-like internet experience. And they exist in a world where several professionals depend on the internet for work.

Clearly, they have a lot going for them. At the heart of all of this though is the OS, Chrome OS. While Google only allows it to be installed on authorized devices, other developers and even companies have filled in the demand for Chrome OS on other devices. Sure, Chromium OS or its forks are not exactly Chrome OS but the experience is very similar after installation. It’s like using a Pixel Experience ROM on a device that’s not a Google Pixel, in case you understand custom ROMs on Android.

How to Quickly Set Up a New AirTag Using Your iPhone

10 Steps You Should Know to Protect Your Online Accounts

How to Use Signal App as a Note Taking App