Huami Amazfit smartwatches are quite known for their stylish appearance at very affordable price tags. Most of the smart wearable devices from Amazfit have been considerably gained some upgrade in terms of features, to be called as smartwatches instead of just smart fitness bands. Amazfit GTS is such an affordable smartwatch you could get to use as a daily driver.

If you are looking to buy a smartwatch with sufficient features at an affordable price tag, take a look at our detailed review on Amazfit GTS.

Amazfit GTR, the preceding model of Amazfit GTS, did feature a rounded dial design that resembled any classic wristwatch in the market with iconic stylish design. The watch dial consisted of several gestures, which reminded of the Samsung Gear Watch S3 and Moto 360 smartwatches. 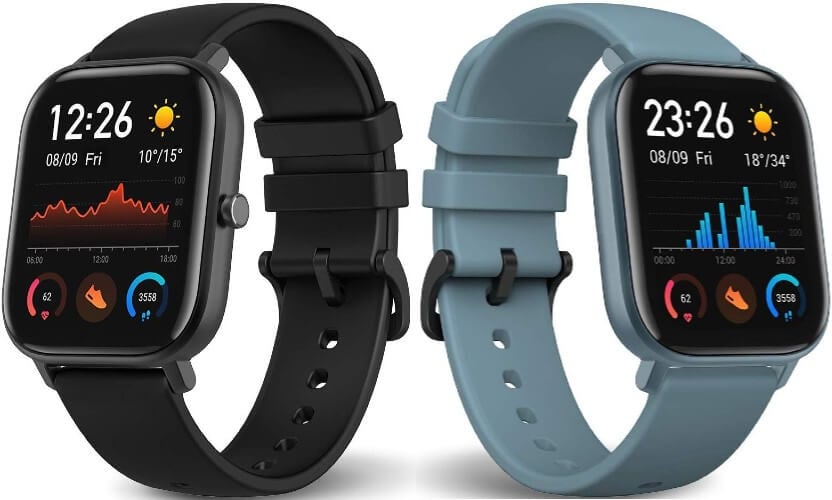 Amazfit seems to have stepped up in terms of design aspects with the Amazfit GTS. Instead of a rounded dial, Huami just made the device with the design inspired by Apple Watch. The Huami Amazfit GTS has a squircle shaped dial with 2.5D glass on the top of the display, along with a watch crown on the right side.

Well, this is exactly what Apple does with Apple Watch, except the GTS does not have an extra side button. The crown is placed in the side middle, and it does not rotate, unlike Apple Watch. You can just use it as a side button and it will take you to watch face, lock or unlock the smartwatch.

The watch strap is installed using a quick-release mechanism, like in most other smartwatches. therefore, you can remove the watch strap in a single click and replace it with another one. There are many third-party straps available, in fact, Amazfit does not sell any. the entire watch is waterproof so that you can take it to the deepness up to 5ATM pressure, or 50 meters depth. 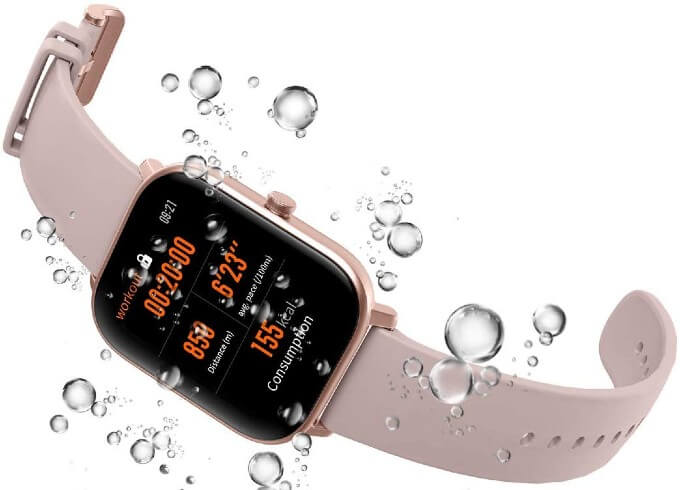 On the back of the watch body, there is a pair of PPG Bio-Tracking Optical Sensors, in order to measure the heartbeat, blood flow, and blood pressure. Alongside, the magnetic charging points can be found, which makes contact with the charger when you plugin the Amazfit GTS. Even though the entire smartwatch pts together the display and other components within the metal chassis, the backside is finished using a plastic case.

Amazfit GTS is obviously a facelift to the previously released GTR, packed with plenty of features onboard. Even though the GTR looks pretty good and original in terms of design, the Amazfit GTS comes with a slimmer design, with almost similar features.

First of all, the design itself resembles Apple Watch and people get confused at a glance. Similar to the former, the Amazfit GTS smartwatch does feature a water resistance up to 5ATM, which is apparently suitable for swimming for a longer time. However, we would not recommend it while scuba diving. 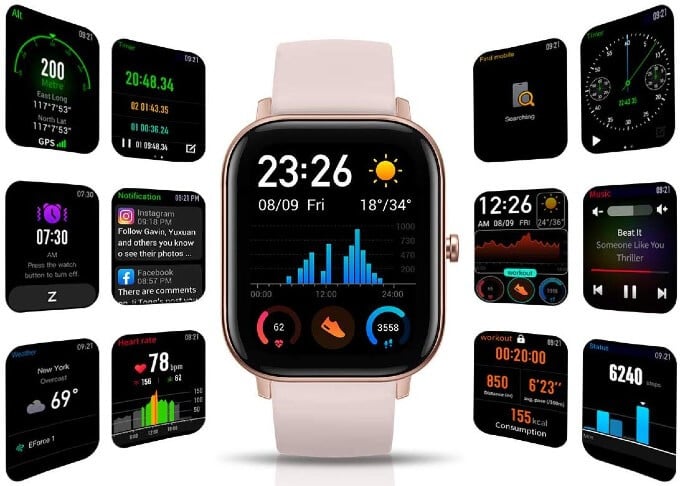 A bunch of sensors is well-equipped to track your activities on a daily basis. We have tried all the available activity modes, in order to measure the accuracy. Even if the GPS is able to track your location accurately, the step tracking is not that reliable. In other terms of fitness tracking including heart rate monitoring, and other specific activity monitoring.

The PPG tracking sensors on the Amazfit GTS smartwatch helps you monitor your heartrate 24-hours. This is quite a big feature that most of the fitness band buyers look for. It can even alert you if your heart rate goes above 150bpm.

Although it is not the same as the ECG monitor on Apple Watch that detects the change in your heartbeat rhythm. There are 12 sports modes you can switch between, on Amazfit GTS, like any other devices from the company. 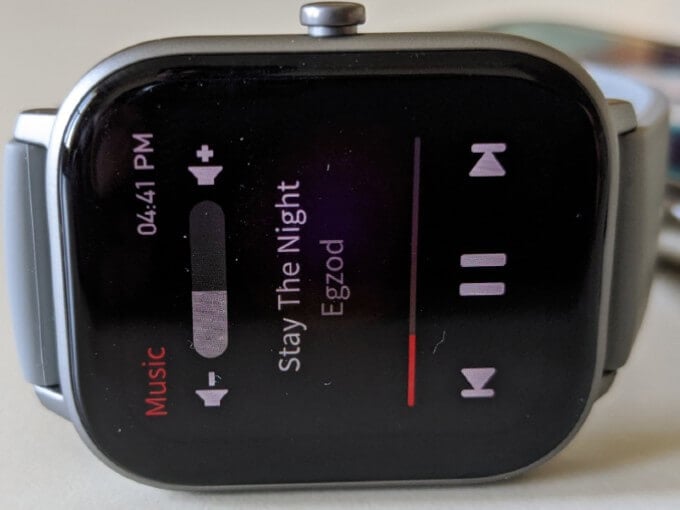 The additional features include musical control, incident notifications are available on Amazfit GTS. The above screenshot with Spotify playing on iPhone 11. The controls work perfectly.

We have struggled with the calendar synchronization and we couldn’t make it work yet. This is a new feature that we noticed compared to the GTR or BIP model. Similarly, the weather information is picking up from the paired phone (support both Android and iPhone). You have to provide location access to Amazfit App to get the weather update on GTS.

Also Read: How to Install Custom Watch Faces on Your Amazfit GTS or GTR with iPhone

The Chinese vendor has worked well with the display placement on the smartwatch. The stainless steel frame has holds the 1.65-inch Super Retina Grade AMOLED screen, protected with a 2.5D curved glass, resembling the Apple Watch.

Meanwhile, the Amazfit GTR is still on the market with a 1.39-inch circular display, if you are looking for smaller dials. The vivid, bright AMOLED display makes it handy to use even under bright sunlight. The screen does not have ugly thicker bezels.

You can turn on the Always-On display with GTS if you are ready to compromise with battery life. The GTS Always-On display can set for digital or analog watch faces. Compared to the Amazfit BIP, this is a software feature introduced in recent updates that they did in Amazfit GTR too.

GTS lets you customize the watch face. Like Apple Watch, you can’t customize all watch faces. The Amazfit GTS comes with two stock watch faces and you can customize those two faces with different variables available.

You can change all display elements here except the main clock. You can have press and hold on the watch display to get the customization feature.

If you were looking for a fully-functioning Android Wear smartwatch, you better off for some other product. This is not a complete replica of any other “smartwatch,” but just a half-done smartwatch which is way more of a fitness band. You can track all of your fitness activities, daily routine, sleep and all, like other contemporary fitness trackers like Mi Band 4. At the same time, you can get other extra “smartwatch features” like watch faces. 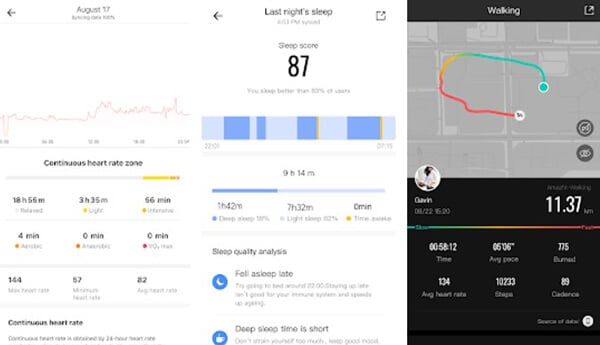 Apart from using it alone, you can get more options and access to extra features by pairing the device to your smartphones. You can now use it with both Android as well as iOS devices, which apparently makes it one of the most favorite affordable smart wearable.

The entire User Interface is based on the neon-on-black concept, in order to take advantage of AMOLED display. There are plenty of watch faces that look modern as well as classic at the same time. You can download apply new watch faces to your Amazfit GTS by using the Android or iOS app by Huami.

Even though the watch provides a fluidic user experience over the Operating System, it does not allow much customization in every aspect. For example, you will not be able to create a custom watch face, unlike Apple Watch or other smartwatches in the market.

Amazfit GTS is actually meant to be the cheaper successor to the GTR smart fitness watch. However, it does not make you feel so, though. The larger display itself is a huge upgrade for a smartwatch at $140, with an Apple Watch-like design. This half-baked smartwatch is actually a fitness tracker ith larger display and pairing features. 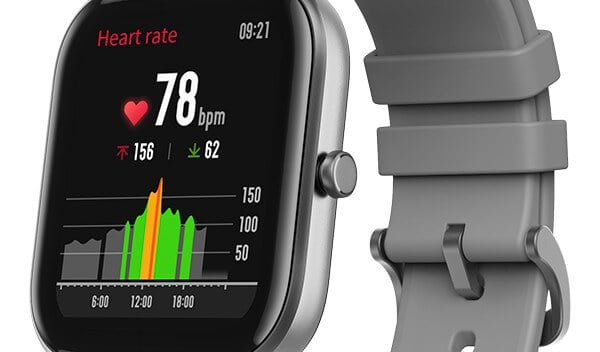 The activity tracking mode selector actually helps the user to overcome the insecure feeling with the limited features on the smartwatch. In contrast with any other fitness trackers in the market, the Amazfit GTS has managed to deliver almost accurate tracking data and faster syncing with the paired app. The GPS Signal Loss issue faced with Amafit GTR seems to have fixed with this one and has greater accuracy in real-time tracking. 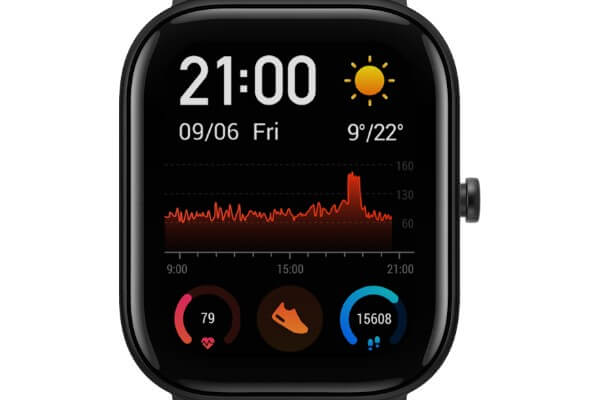 The step counter is what brings the smartwatch down this time. The pedometer does not seem to recognize every walking-related activities, so it misses out accurate information. You can turn on the notification mirroring from your Android smartphone through the app.

However, the notification delivery over Bluetooth seems to be unreliable and inconsistent, which is quite annoying. Sometimes, it is not even possible to enable mirroring of third-party app notifications.

The smartwatch offers a battery backup of up to 14-days max, on a fully charged battery. However, you could extend it up to 46 days if you turn off all the extra features and use it in the basic watch mode. 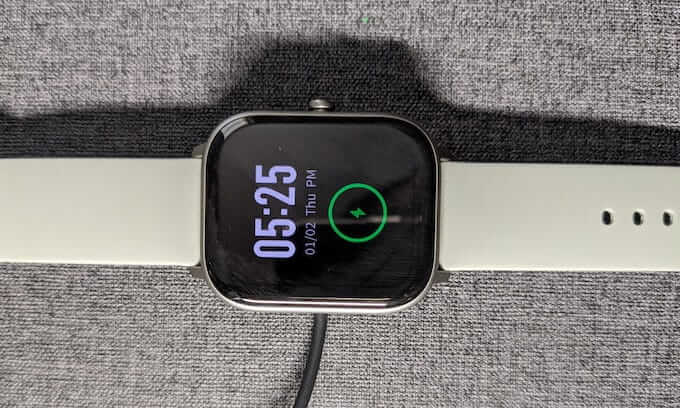 The Magnetic 2-pin POGO connector is used to juice up the battery pack. It takes around 2-hours to fill up the battery from 0%. If you are looking for a smartwatch with classic stylish design and more than 30 days of battery life, check out our review on Amazfit GTR.

If you are still unsure about choosing Amazfit GTS for your daily usage, check out its pros and cons to make a final decision.

Amazfit GTS is actually a younger sibling of the Amazfit GTS, which is not even a complete smartwatch in terms of functionality.

VIOFO A139 3-Channel Dashcam Review: All-Round Surveillance for Your Car