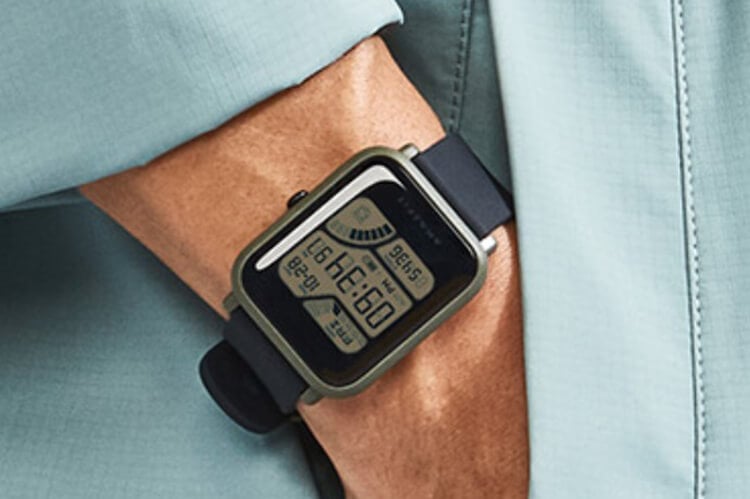 Fitness trackers are seeing a constant hike in the sales graph these days, due to their usability in tracking health realtime. However, most of the fitness bands in the market do either have half-baked designs or smaller screens. Amazfit Bip smartwatch is a solution for those who are looking for fitness bands with a stylish look. We are doing an Amazfit Bip review for the fitness enthusiast in you, but seeking more a more stylish option.

Check out the complete Amazfit Bip Review to decide whether it suits your needs.

Amazfit smartwatches are well-known for their catchy designs, even for their low-end smart bands. Several popular models including Amazfit GTS and GTR had such amazing design aspects and functionality, which enables it to stand beside any other fully-functional smartwatch in the market.

While we were considering the Amazfit Bip smartwatch review, the first thing that caught on the eye is the design itself. You can call it a cheap Apple Watch substituent, in terms of design. However, the entire picture is different inside.

Amazfit Bip resembles its elder sibling Amazfit GTS, which in fact does have greater specifications and a bit larger display. Instead of the metal frame, the company shelled the hardware within a rigid plastic body, having a premium feel to an extent. Also, the backside is extended within the same plastic shell.

There are optical heart rate sensors and LEGO charger connecting pin on the rear side of the Amazfit Bip smartwatch. Same as every other Amazfit smartwatches, the Amazfit Bip has an easily removable watch strap, with a latch to easily fix and replace. Almost every other premium straps made for Amazfit devices are compatible with the Bip.

Even though the smartwatch resembles the iconic Apple Watch at some points, the display placing and the side buttons are quite different. We would say that it looks more like a hybrid of Apple Watch and Pebble smartwatch. The crown on the right side is just a single-stage clickable button to take you to the home window.

How to Sync Amazfit Bip and Bip S with Strava

Don’t get it confused with a fully-functional smartwatch when you decide to buy an Amazfit Bip. During our intense test period, we had to conclude that the Amazfit Bip is simply a fitness band with a larger display and smartwatch-resembling design. If you have been a fan of typical fitness bands like Mi Band and Honor Band, this is for you. In terms of functionality, you get almost similar features on both types of devices. 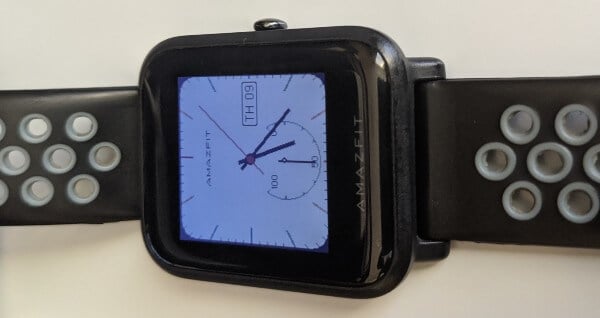 Since the company announced it as a fitness tracker band, most of its features are aimed at daily activities. You can track your daily exercises and other activities including running, walking, indoor running, cycling, etc. All these four sports modes will identify your body movement, heart rate, breath and will record how fit you are.

You can also check your notifications and can get call alerts on your smartwatch while you are exercising. Unfortunately, you cannot do any action with text message notifications. The only actions that work in smartphone mirroring are declining or ignoring calls. Still, it does not allow you to attend any calls. 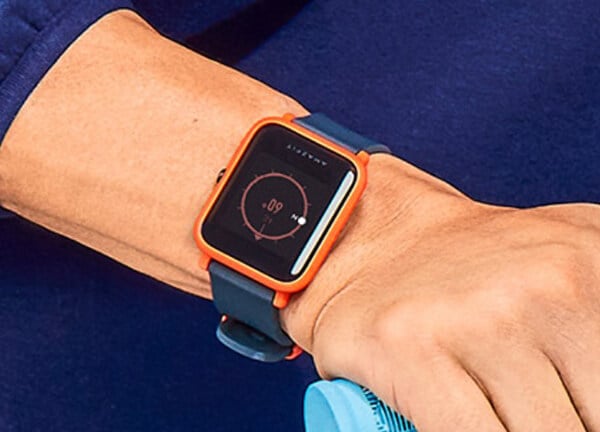 The IP68 Water and Dustproof certificate from Amazfit make it more confident while wearing on outdoor conditions. However, swimming is still not an activity that it records. Also, it is not suitable to dip underwater for a longer time. So, think twice if you are buying this for all your activities including swimming. The sensors are designed in such a way that it can identify whether you are doing an aerobic or anaerobic activity.

Check out our review of the Amazfit GTS smartwatch which you can use even while swimming.

Amazfit Bip, unlike other smartwatches, comes with a reflective LCD screen bounded to 1.28-inches. The reflective LCD is something that you might have seen on older 2G Nokia cellphones like Nokia 3310. The display can show you the User Interface without even having a backlight because the active pixels reflect the external light. 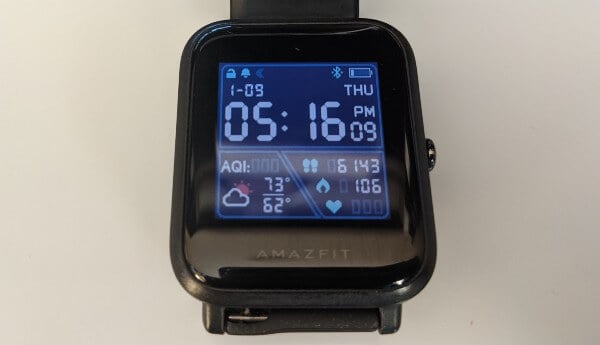 The backlit for the screen is there by default and it turns off after a specific period of inactiveness. The LCD display acts as an always-on-screen so that you do not have to wake up the watch each time to see the time and check the step counts. 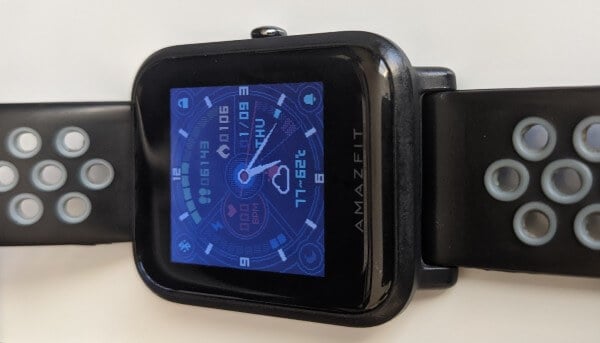 This is not really made for a true outdoor usage, from our experience so far. The backlit of the screen is not that bright and you could sometimes barely see under the bright sunlight. In case you are okay with the indoor activities mostly, the Amazfit Bip smartwatch is good to go.

As we have mentioned previously, the Amazfit Bip is not a fully functional smartwatch for everyday usage. The Operating System on the smartwatch will make you feel it is incomplete at some points. The User Interface has some colors in it, but the display is not capable of showing all the colors. However, the screen is not flooded with information but has everything you need to know at a glance. 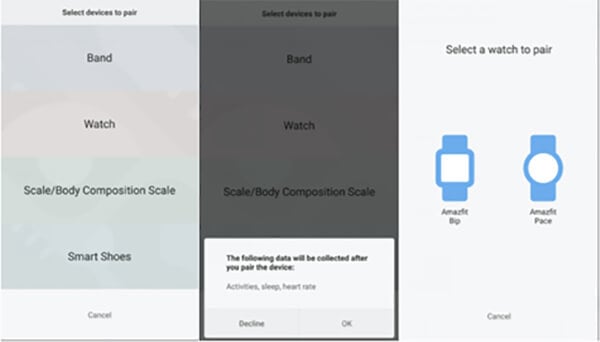 Coming to the user experience, you might not feel it is completely reactive to the gestures. Even the normal swipes take up a little bit of time to scroll from the window. Amazfit has included certain inbuilt watch face, for the sake of the display. You cannot customize them, but can apply any of the available watch faces and use them on always-on.

We had not many expectations on this cheap smartwatch regarding the performance. Although, it did manage to exhibit decent performance as a fitness tracker wearable. There is nothing much concerning the performance as it cannot load or support any third-party apps or even mirror apps from your smartphone. The Amazfit Bip can simply track all your activities, mirror notifications, and calls from your smartphone, and can monitor your health continuously. 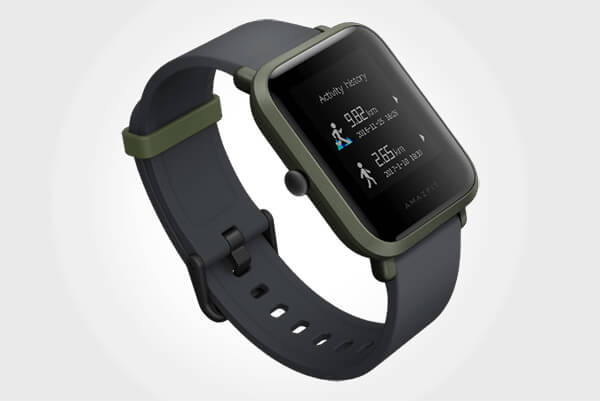 The heart rate monitor is quite accurate, but there is no fulltime monitoring feature available on the Amazfit Bip smartwatch as of now.

The issue with the GPS accuracy is common among Amazfit users. And, the story is no different with this wearable too. The step counter works fine, as same as the Mi Band 4, and you can find the step count right from the watch face itself. The Bluetooth 4.0 connectivity is a bit laggy in syncing the data between the smartwatch and the app, compared to Bluetooth 4.1/5.0 on other newer devices.

The Amazfit Bip comes with a tagline “You’ll forget what charging feels like,” and the battery performance is somewhat justifiable to what they claim to have. The fitness smartwatch has a 190mAh Lithium Polymer battery, which offers a battery backup of 45 days in a row. Mostly it takes more than 2 hours to juice up the battery from 0 to 100%.

During our usage period, the Amazfit Bip smartwatch did exhibit excellent battery backup throughout the first few cycles. However, it then seems to drain out much faster and they offered backup is trimmed down to 25-30 days at a go.

The Amazfit Bip is a smartwatch-looking fitness band, that you can use to track your daily basic activities and show you time, without spending too much money. It is a pretty good substitute option for Mi Band 3 or 4, with stylish iconic design.