How to Setup and Customize Routines on Google Home

Even while using the Google Home on a daily basis, many have still not tried out most of its features so far. If you are an average daily user, you must be using the device for playing some music, update your shopping list, etc. over the voice. But in case you are unaware, Google lets the Google Home devices to run specific tasks at a certain time on every day as a routine, without even commanding each and every time.

In this article, we will show you how to set up and customize Routines on Google Home.

What are Routines on Google Home?

Routines, obviously as the name suggests, is a feature which Google introduced in Google Home to automate several tasks on a daily basis. Routines are basically several sets of tasks the Google Home will do when it is being triggered. We can also set a trigger time for routines to automate the tasks. So, when the time hits, if your Home device is online over your Wi-Fi, it starts to push out the tasks one by one.

The Home app to control Google Home devices come with many prebuilt routines, which can be activated upon specific commands. For example, the Good Morning routine for Google Home can be triggered by commanding “Hey Google, Good Morning.” Your Google Home will identify the routine and do as recorded in the list. You can even customize the tasks though. Each routine can also have one or more trigger commands for better usability.

Also read: How to Customize Google Home for Indian Users?

Every Google Home device come with a set of predefined routines, in order to understand the concept of using/maintaining the Routines and to make your life easier. These ready-made routines contain quite useful, simple, widely used tasks such as reading news, reading out your to-do list, etc. You might not have noticed the Routines tab on your Home app even if you are using daily. Here is how to find out and explore the Ready-made routines on Google Home app. 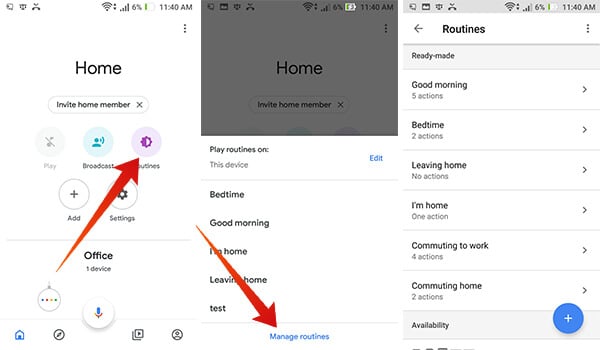 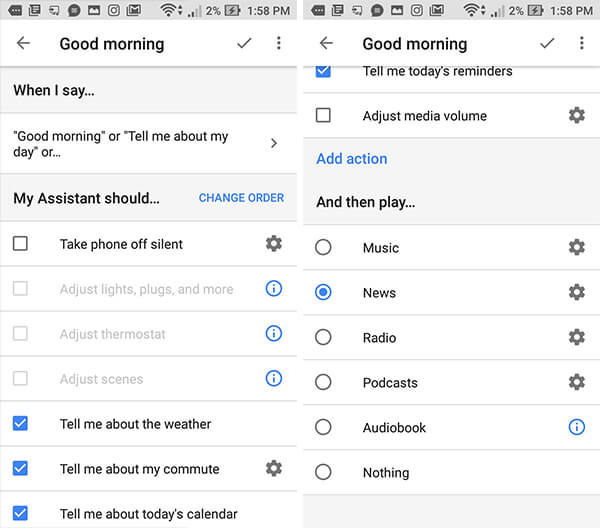 From here, we can find out the routines that Google already provides and can customize them later.

Also read: How to Customize Microsoft News App for Favorite News in Windows 10

How to Create New Routines on Google Home?

If you are not satisfied with the default routine lists, you can create custom ones for your personal use. Similar to the prebuilt Routines, you can set unique commands, tasks, and behaviors for the custom Routines. Here is how to create new routines on Google Home. 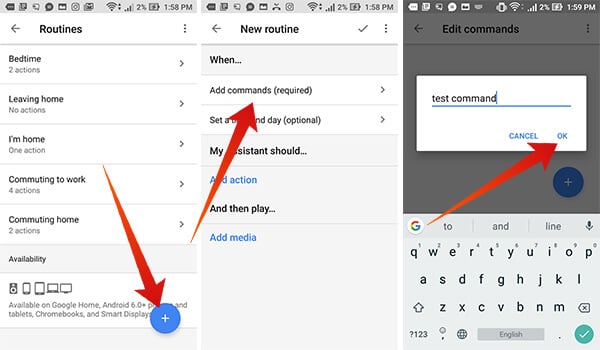 After adding the custom routine as above, you can then start using the Routine like an inbuilt function of the device. To test out the new Routine, you can ask Google Home for a routine by using the command you saved. For example, “Hey Google, I am working,” if you have provided the command as “I am working.”

Also Read: How to Stream Podcast to Google Home

How to Schedule Routines

Routines feature will do trigger when you call for it. So, the tasks are kept under several routines until you command for such routines from the list. Currently, there is no scheduling option for the prebuilt Routines on Google Home. In case you want to schedule a ready-made Routine, here is a quick workaround. It is nothing, but to make the Routine from scratch. Google Home allows scheduling for the custom Routines, so we can apply the same with the same tasks as in the ready-made Routines. The only difference is that the commands could not be the same.

First of all, you need to make a custom routine as described before. If you are re-creating an entire ready-made routine, you need to check for the tasks in the stock one and then add the same on the new custom Routine as well. There is no need to take any extra actions to schedule it if you have provided “Day and Time” during the creation. If not, here is how. 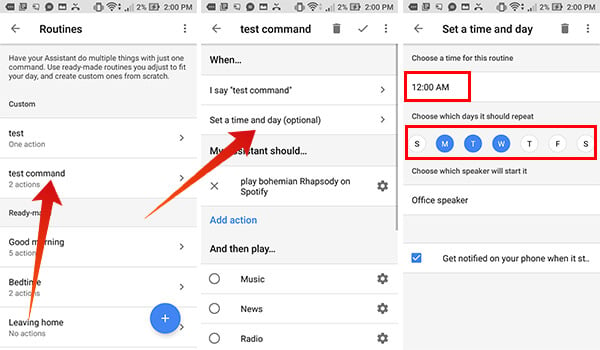 After setting the scheduling for the Routines, all the tasks with the Routine will get automated and triggered at the right time.

Interestingly, if you have the Home app, you can also try out these Routines on your Android smartphone as well. It can run from your Google Assistant instead of a Google Home device. However, Google Home does not support Routine triggering with sensor data or detection, as of now. Amazon Alexa supports the same, also, expected to come to Google Home soon. It is time to try out the Google Home’s new Routine feature. It can also help you to provide shortcut commands for the actual lengthy voice commands.

How to Copy Paste Text from Image on PC Quickly

8 Best Wireless Karaoke Microphones to Perform Like A Pro