How to View Saved Wi-Fi Passwords on Linux (Ubuntu)?

In our daily lives, we deal with passwords more often than we ever did just a decade ago. Most online services you use require a different ID and password. Before all of that though you probably had to create a password for your Wi-Fi. A Wi-Fi password is easy to forget because you don’t really use it as often once you’ve signed in. If you do forget it, it can be a nightmare because there isn’t exactly a “forgot password” button anywhere.

Editor’s Note: If you’re not as familiar with Linux, there are usually at least two ways to do anything on a Linux machine. Consequently, there are two ways to go about this as well. One of them is the command line method. We feel the command line is generally easy as long as you’re comfortable with it. All you’ll be doing is copying and pasting a few commands from here into a Terminal window, after all. Many aren’t comfortable with the command line though and fortunately for those of you, there is another way to get the same results with a few clicks here and there using the GUI (Graphical User Interface).

Related: How to Find Wi-Fi Passwords on Mac and Windows

Ubuntu generally saves your WiFi network information under a “Network Manager” folder on your system. Inside this directory is a configuration file which can be accessed and thus, we can retrieve the Wi-Fi password. 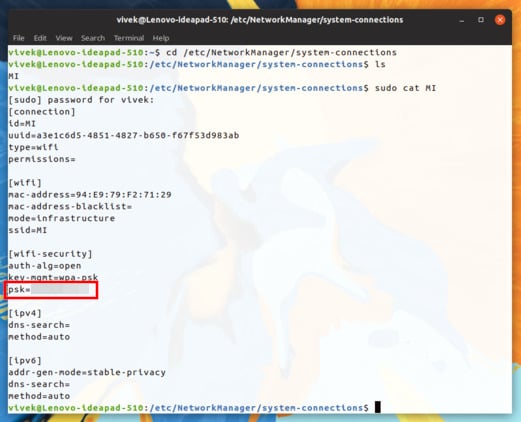 What if You’re Using wicd?

It stands for Wireless Interface Connection Daemon and is an “open source software utility to manage both wireless and wired networks for Linux.”, as stated in the Ubuntu documentation. It “aims to provide a simple interface to connect to networks with a wide variety of settings.” In the odd chance that you’re using wcid to connect to your Wi-Fi network, you can find the configuration file in the /etc/wicd folder. If you didn’t already know what this is, you probably don’t have to worry about it. In which case, you can forget we even mentioned wcid and the method above is perfectly valid for you.

Related: How to See Saved WiFi Password on Android Device?

Before we conclude, we would like to point a few more things that are going to be useful for newbies in Linux.

Now that you have your password, you can note it down for future use or just let your Linux PC keep it for you.

6 Best Roku Channels to Stream any Media to TV

4 Ways to Transfer Music from iTunes to Android