WhatsApp is the fastest growing messaging service in the world with active users near to one billion. Day by day the numbers of WhatsApp users are increasing and the most attractive thing to the users is that the developers are upgrading the app with nice additional features.

WhatsApp is used for sending texts, images, videos etc. that can be sent via the data connection of the mobile phone without relying on the traditional SMS/text, MMS services along with the recently introduced voice call feature.

We may not believe that WhatsApp introduced in 2009 for iPhone without much features and it was like plain texting service with lot of bugs and crashes in the initial days. Gradually all the services are introduced in the updates like image & video handling, read receipts and voice call feature.

We will be exploring some of the latest features WhatsApp from the latest updates like sending a reply to particular message and text formatting options like bold, italicize and strike though while typing.

Installation of WhatsApp in the phone is less tricky compared to most of the other apps and the setting up will require a text message receipt using the provider. This will be for first time use only until we are switching our mobile number where it will ask for verification again by sending the message.

Once installed, it will fetch the contacts of the phone and will offer the WhatsApp contacts to start messaging immediately. One of the powerful features of WhatsApp is the formation of groups where the maximum participants reached up to 500 now. You can see some info here regarding few group messaging features.

WhatsApp Reply to a Previous Chat

This is the latest feature added by the developers in the latest update. With this feature, we can send a reply to particular message which can be readable also. This is one of the mostly requested feature which can avoid confusion on which message the sender meant while replying. 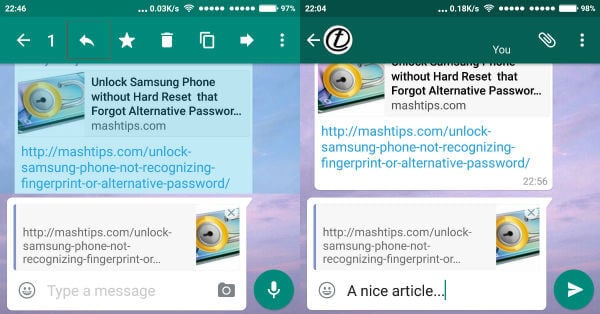 To reply the message, long press the required message, and you can see a new reply icon as a curved arrow, where you need to tap. Now you can type the message as the reply. You can see that the message to be replied as attached just above your reply. This feature is much useful in groups communication where multiple persons are typing messages.

WhatsApp Message in Bold or Italics

This is also another feature that is useful while sending messages to grab more attention to the reader’s. We can bold the typed words or sentences with an easy trick that will attract the readers for the important matters in the message. 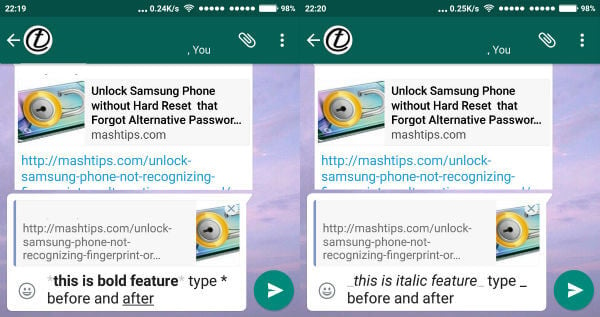 This is also somewhat similar feature to the bold still attractive while sending the messages to some of the users. The procedure to get italicized is almost same as the bold feature. Here we need to type _before and after the word/sentence we need to italicize. Eg: _italic_

This is also another new feature WhatsApp introduced recently as text formatting option. To invoke this feature, we need to put ~ before and after the word or sentence we need to strike through. 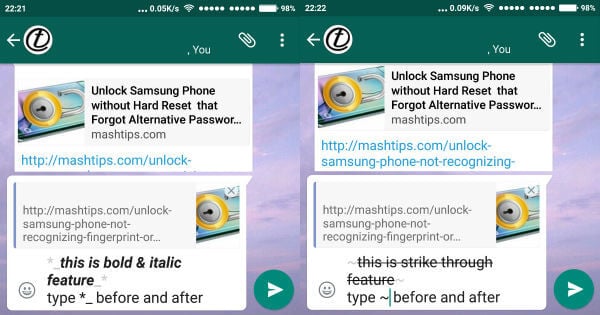 You can also combine bold and italics features by adding *_ before and after the word/sentence to get the bolded, italicized word eg: *_bold and italic_*

The more and more features along with the stable performance makes the App is popular and growing. Another feature where the users are expecting to arrive is the video call feature which we can expect in the coming updates.

Someone may also expect an easy storage and retrieval solution of the WhatsApp messages for later reference. WhatsApp is most favorable to most of the Smartphone users among other apps like WeChat, Viber and Line due to the stable performance of the App during the past periods.

How to Get Chat Bubbles on Android for WhatsApp, Messages, & Other Apps

A Guide on How to Get and Use WhatsApp Community

WhatsApp Call Links: Everything You Need to Know

How to Solve WhatsApp Not Working Issue on Android