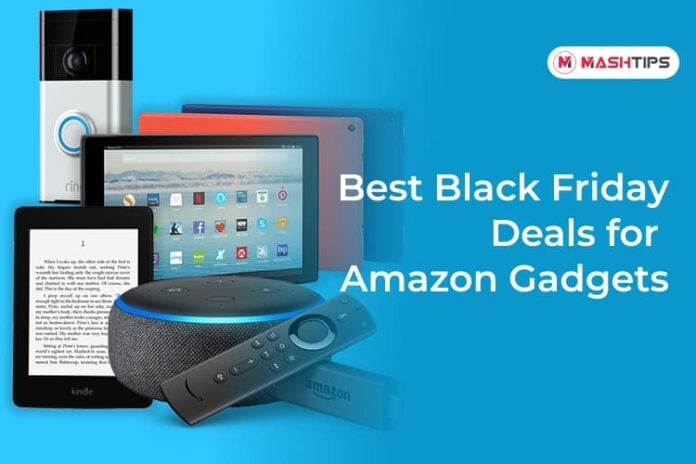 Traditionally, Black Friday arrives a day after Thanksgiving on November 27. But today with so many online retailers and supermarket chains the competition for getting your dollar is pretty tough. Most major retailers often come early with Black Friday deals that last well into the next month. Amazon has already announced that several of their Black Friday deals will be active starting November 20th.

Here are the best Amazon Black Friday deals you can look forward to starting today.

Amazon Echo Show is an Echo smart speaker with a display, in case you didn’t know. It’s the smallest smart display from Amazon with a 5.5″ screen. The Echo Show 5 is a great little gadget for your bedside. It can be your alarm clock, late-night Netflix streamer, a comfortable video call machine, and much more.

Powered by Alexa, it can do all Alexa things too, such as provide you information, tell you about the weather, update your to-do lists, and so on. Since there is a display, you can even ask Alexa to show your security camera feeds. You can grab an Echo Show 5 for as low as $45 when the Amazon Black Friday deal goes live. Normally it goes for about $90.

Echo Dot is Amazon’s most popular smart speaker. The 3rd generation isn’t the latest in line but it is still a very good option if you prioritize affordability. During the Amazon Black Friday sales, you could get it just below $20. The Echo Dot 3rd gen features the same design as previous echo dots but uses a fabric material for the body.

The speaker quality is better than the Echo Dot 2 and it can also be paired with any Echo Dot for a stereo sound effect. Obviously, you can do all Alexa powered smart speaker things such as setting up alarms, dropping in on other rooms, announcing things, controlling smart home devices, etc.

The Amazon Echo 4th gen is a drastic redesign from the original. It’s now more compact, round, and dare I say cute. It uses a fabric layer on the upper part of the body while the base is still plastic. The new Echo provides a rich sound experience with deep pass and clear details.

Amazon Echo 4th Gen can also adapt the audio output based on its location in any room. The software features you get are the same across all Echo smart speakers. That means you can still do all your favorite Alexa things. Amazon Black Friday deals for the 4th gen Echo start on November 20th.

The 4th gen Echo Dot looks a lot like the Echo 4 and is the latest generation of Echo Dot available. It uses the same spherical design with the top covered in a fabric layer and a plastic base. The new Echo Dot 4 is significantly cheaper than the Echo 4 but it does cost about $10 more than the 3rd gen Echo dot.

The only obvious advantages you can count on are perhaps the more aesthetic design and better sound quality. The Echo Dot 4th Gen is expected to go on sale for below $30 while the Black Friday deals on Amazon are live. Also, watch our Echo Dot 4th gen review here.

The clock is an LED clock so you don’t exactly get a screen otherwise it would be an Echo Show. It’s a great bedside alarm clock replacement apart from being a smart speaker powered by Alexa. You get the same Alexa smarts you get with any other Echo speaker in addition to the LED clock.

If you’re not already familiar with Ring, it is Amazon’s home security lineup. Ring Video Doorbell Pro has a built-in camera that can record 1080p HD videos. You can also see, hear and speak to people at your door in real-time using your phone, tablet, PC or an Echo Show. By setting up motion zones you can also get notifications whenever motion is detected.

You can then check the live feed to see what’s going on. At around $170-180 the Ring video doorbell pro ensures security and protection to your home, even when you are away. Keep in mind though that the Ring Doorbell does not have a rechargeable battery. So connecting it to your existing wiring is the only way to get it to work.

The Echo Show 5 Black Friday deal won’t go live until November 22. However, if you are interested, you can get an Echo Show 5 and a Blink Mini indoor smart security camera in a bundle deal that starts on November 20.

The indoor security camera from Amazon can record 1080p video. You can easily plug in the device like any other electronic device. Since it’s an indoor security camera, you can use it to keep an eye on your pets when you’re away, for instance. The camera supports motion detection as well.

Related: 6 Things to Consider before Buying an IP Security Camera

Eero is another Amazon product lineup of mesh Wi-Fi system that works with Alexa. The Eero 6 system covers up to 5000 sq. ft of area and provides speeds up to 500Mbps. The network adapts to space much in the same way an Echo speaker’s audio output does.

Users can connect more than 75 devices to this Wi-Fi 6 network. The smartphone app makes set up and management convenient from anywhere. It also doubles as a Zigbee smart home hub making it easy to connect and control compatible devices on the network with Alexa. This is a 3 pack bundle so you get 3 Eero 6 devices to create your Wi-Fi mesh.

If you’re into e-books there’s no way you have never heard of the name Kindle. Amazon’s Kindle tablets have done to the e-book reader market what the iPad did to the tablet market. Kindle tablets use an e-ink display to keep costs down.

The new Kindle though comes with a backlight so you can still read it in the dark without an external light source. The 8GB of built-in storage should be enough to download plenty of books. You can buy an ad-supported version to get an even more affordable Black Friday deal.

Related: How to Get the Most Out of Your Kindle E-Reader

Amazon Fire tablets are affordable tablets designed mainly for media consumption. Since these are affordable, you can buy them for kids without worrying much. In fact, this Fire HD 10 tablet might just be available at around or below $80 on Amazon Black Friday sale.

The Fire HD tablet features a 10.1-inch Full HD display. The base model has 32 GB of storage but a 64 GB model is also available. If that’s not enough, the tablet also supports external memory up to 512 GB. The 2GHz processor and 2 GB of RAM are just enough to play HD videos, read e-books, play music, and run light-weight kid-friendly games. There is also a 2MP 720p webcam for video calls.

The Fire HD 10 Kids Edition tablet is the same Fire HD 10 tablet packed in a more sturdy, child-proof body. That is to say, a very thick case wrapped around the tablet protects it from accidental falls.

Amazon Fire HD 10 Kids Edition is available in Blue, Pink, and Purple. It comes with 1 year of Amazon Kids+ subscription. This gives you access to over 20,000 kid-friendly apps, games, books, videos, audiobooks, and other educational content from PBS Kids, Nickelodeon, Disney, and more.

Amazon’s Fire 7 Kids Edition tablet is a smaller, more affordable tablet for kids. It has a similar case to other Kids Edition Fire tablets, designed to withstand the smash hits. Even so, Amazon provides a 2-year guarantee on the tablet. So if your kid does manage to break it, Amazon will replace it with a new one for free.

The tablet is available in Blue, Pink and Purple and includes 1-year of Amazon Kids+ subscription. This gives you access to over 20,000 kid friendly apps, games, books, videos, audiobooks and other educational content from PBS Kids, Nickelodeon, Disney and more.

In this Black Friday bundle deal, you get 3 Blink outdoor security cameras. The cameras are designed to be weather resistant so you don’t have to worry about rain or snow. The two AA lithium batteries included with each camera can power them for up to 2 years straight.

You don’t have to worry about wires, although you may want to secure it in some other way. Blink Outdoor Security Cameras support motion detection and will notify you via the Blink Home Monitor app.

If you want a smart TV, you don’t need to go out and buy a brand-new TV. The Fire TV Stick Lite is an affordable way to turn your TV into smart. The Fire TV stick Lite also comes with an Alexa Voice Remote Lite.

The “Lite” on the remote stands for no TV controls. So you don’t get the volume or mute buttons. The Fire TV Stick Lite can support full HD streaming but not 4K. Most of the popular streaming services that have an app for TVs also have Fire TV apps available.

If you want a more powerful Fire TV streaming stick, this is the best Amazon has to offer. The Fire TV stick can stream 4K content with ease, provided you have the internet speeds for it. The Alexa Voice Remote you get with it also has volume and mute buttons apart from the basic Fire TV controls.

These are the best Amazon Black Friday deals on Echo smart speakers and other Amazon hardware products. As we get closer to Black Friday Amazon will eventually roll out more deals for all kinds of products, and we’ll definitely be bringing the best of those to your attention as well.