Nintendo 3DS is one of the best successful video gaming consoles that are portable and contains a huge range of gaming titles. Displaying the best stereoscopic 3D effects, the current version of Nintendo 3DS inherits improved controls and graphics giving you some best 3DS games to play.

We listed 15 best Nintendo 3DS games to start playing this great console for you and entire family members. 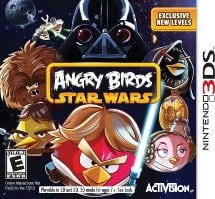 Play this 3DS Game and connect with the fascinating journey filled with adventure. With Angry Birds Star Wars, get completely immersed in the world of Star Wars. Become the ultimate Jedi master by clearing the levels and use the Force and use your lightsaber against the evil pigs and their leader Darth Vader.

Bring the freedom back in the galaxy while traveling from the Tatooine deserts to the devastating Pig Star. Enjoy the space adventure that is both legendary and famous in every age. 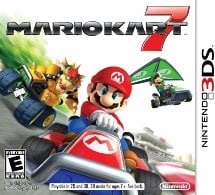 Mario Kart 7 is the latest installment in Nintendo 3ds games bringing the racing experience into the glorious 3D world. Drivers can make their karts to get a competitive edge and encounter the best in every level. Choose to race in the preferred Mushroom Kingdom character to enjoy the game. It also supports the SpotPass and StreetPass features to give an additional benefit.

Use the hang-gliders to navigate easily when in the air and drive underwater. Even racing on the tracks that are new, you can easily race on the classic ones. The irregularity in the races of Mario Kart 7 makes the game so fun and the best 3DS game for Mario addicts. 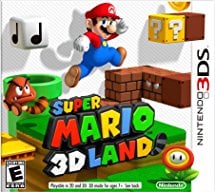 Considered as one of the best-designed video games, Super Mario 3D Land is based on the vintage save-the-princess gameplay. With the modern touch and use of 3D graphics, the game is addictive. See the real nature of the surrounding environment without any special tool while playing.

Now in the game, Mario can perform a rolling somersault attack to fight the enemies. Other than this, there are many new abilities to spice up the adventure. With the presence of new enemies, the gameplay is made better in every possible way.

The Legend of Zelda Ocarina of Time 3D 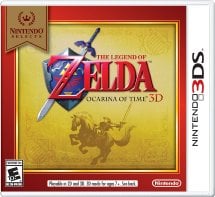 Encounter and play the quest that turns into a mission of rescue for Princess Zelda. Go through the darkest dungeons, the middle of volcanoes, the heart of the lake, and the frightening desert to rescue the princess. Other than the main quest, there is a Master quest, containing new puzzles with interchanged dungeons for you.

The stellar music and redesigned characters create a great fresh and attractive feel. Receiving perfect scores from more than 20 publications, the game is one of the best recreations of old games. Get the game to add it in your Nintendo 3DS games collection easily on Amazon now. 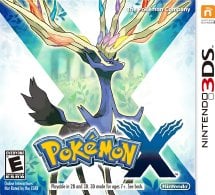 Pokémon X is one of the first mainline Pokémon games coming for 3DS. Travel to the memorizing Kalos region that contains mysteries and never seen before Pokémon for players. Add the new Pokémon in your Pokedex as well as catch them to increase your collection. The game is a welcome evolution in the franchise that is loved by all.

Travel on the land on new Grass-type Pokémon Gogoat that is reliable for moving around Lumiose City. If you are a die-hard fan of Pokémon, then it should be in your best game for 3DS console. 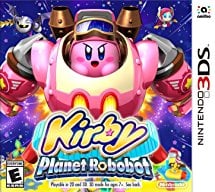 Enjoy the clever use of robotic destruction combining with brain-teasing environmental puzzles in this game. There is more than one boss fight to make the game an entertaining ride. Step into the armor to save the world in which Kirby lives. Stop the ruthless invaders from destroying the homeworld of Kirby by mechanizing everyone.

Copy the abilities of the enemies by grasping them. Defeat the enemies with their own moves. The game can be easily stated as one best 3DS game due to its features and offerings. 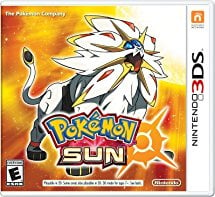 Set out on the adventure to become the ultimate Pokémon trainer in the all-new region of Alola. There are three new partner Pokémons for you to choose from Rowlet, Litten, and Popplio. Discover the new Z-moves and unleash them while battling others.

New areas in the region have new Pokémons for being captured and trained. See and solve the mystery revolving around the Legendary Pokémon. Engage in battles and train your Pokémon to make them better in the course of becoming Pokémon champion. Defeat the Team Skull that is causing troubles in the land.

ESRB Rating: Everyone | Multiplayer: Up to 4 players, Competitive (2-4 players) and cooperative modes (2 players) | Game Levels: 20 Levels | Attractions: All new Pokémon, new region and Catch them all | Buy from: Amazon 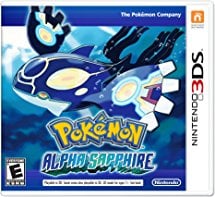 Take on a journey that is not present in any other Pokémon game. On your adventure, meet the best and legendary Pokémon to increase your gameplay experience. You will be playing in Hoenn region, where the battle is constantly on between Team Aqua and Team Magma. Encounter the awe of Primal Reversion, undergone by Pokémon Groudon and Kyogre.

Get close to solve the mysteries present in Mega evolution to make Pokémon inherit this powerful ability. Following the same characteristics of every Pokémon game, this 3DS game is a great pleasure to play. 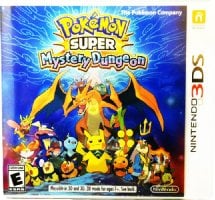 Play as one of 20 Pokémon and encounter the adventure with other Pokémon. You are in a world that only has about 720 Pokémon. Every dungeon is generated randomly and there is no hassle to play the same repeatedly. The player is allowed to choose their Pokémon as well as their partner Pokémon for the journey.

This 3DS game is popular and touted amongst the best 3DS games for its features. With the satisfying difficulty level, the player can easily play the game in his or her way. Do get Pokémon Super Mystery Dungeon for your Nintendo 3DS games collection.

Best Wii U Games to Enjoy for All the Time 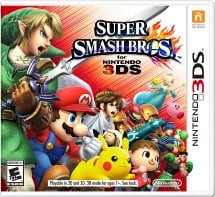 Experience the collision of the game world on the go with Super Smash Bros. Pick your favorite character to clear the stages. Fight with no life bars with other players. The ultimate goal is to knock the opponent as far as possible. Designed wonderfully with the help of vibrant art with perfect graphics and animation.

The formula is kept fresh to ensure that is something new in the class game. Some of the well-known characters of Nintendo are present to make the game more iconic. Brawls in single-player modes are minimal on the console to make it fantastic.

ESRB Rating: Everyone | Multiplayer: Up to four players, Competitive (2-4 players) and cooperative modes (2 players) | Game Levels: 20 Levels | Attractions: Play with Zelda and Pokémon, Battle locally or online with competitors and a great version of sumo wrestling | Buy from: Amazon 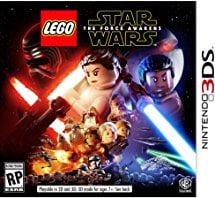 LEGO offers a unique way of reliving the action that is there in the blockbuster film like no other. Use your environment as well as surroundings as cover during the blaster battles.

ESRB Rating: Everyone above 10+ | Multiplayer: None | Game Levels: More than 20 Levels | Attractions: All characters of Star Wars Franchise, Playable content between Star Wars Episode VI: Return of the Jedi and Star Wars: The Force Awakens | Buy from: Amazon 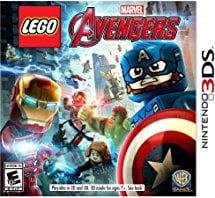 Everybody loves Marvel franchise and when you get in the famous LEGO game, then what else is required. LEGO Marvel’s Avengers is one of the best Nintendo 3DS games that is loved by all. Play as your favorite superhero to save humanity from evil intentions of the enemies. The game features the original storyline from the highly grossing film of Marvel’s The Avengers and Age of Ultron.

If you are looking to play a superhero game and add one in your best games for 3DS list, then see this. The action-packed game comes with original audio and open world to help you to enjoy it more.

ESRB Rating: Everyone above 10+ | Multiplayer: None | Game Levels: More than 200 Levels | Attractions: Above par sense of humor, Simple gameplay and contains about 100 characters | Buy From: Amazon 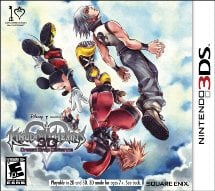 Kingdom Hearts 3D Dream Drop Distance is the latest addition to the collaboration between Interactive Studios and Square Enix. The game consists of an adventure that will take you through several worlds of Disney. The storyline of the game is very diverse and not present earlier in the series. Face all-new enemies, and in the places, you never thought make friends get help.

Use the surrounding environment to create Flowmotion to fight enemies. Shift the reality of the conditions by performing several attacks. Fight with the two leaders of the game Sora and Riku to stop the impending threat. 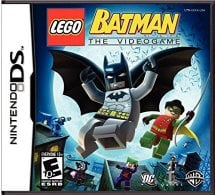 All the rogues are on the loose after breaking out from the Arkham Asylum. Now, it is up to Batman and his partner Robin to stop them from invading the Gotham City. The game takes heads on the Gotham City and its dark streets. Stop the villains to create trouble in the city by fighting them on each level.

Other than Batman and Robin, you can also play as The Joker, The Penguin, Catwoman, Scarecrow, Killer Croc, and much more. Whether you want to help the right or become evil, the choice is entirely yours. Experience the unique abilities of each character to enjoy the game at its best.

ESRB Rating: Everyone above 10+ | Multiplayer: None | Game Levels: More than 100 | Attractions: Play as Robin and other foes, Tons of extra content and Different villains | Buy from: Amazon 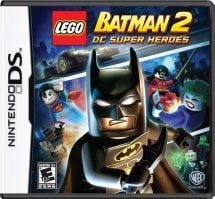 Batman is joining hands with the best superheroes of DC universe. With the alliance, the team is going to outer space for stopping Brainiac to destroy Earth. The alliance also has the most cunning villains fighting alongside the superheroes to stop Brainiac. Get new suits and gadgets as upgrades to play and fight effectively.

You can also customize characters to add your touch to superheroes. A new storyline to give much excitement and entertainment to players. In the game, you can use the Batmobile, Batwing, and Batboat.

ESRB Rating: Everyone above 10+ | Multiplayer: None | Game Levels: More than 100 | Attractions: Play as more than 150 characters, Filled with humor and content, Hidden secrets in every level | Buy from: Amazon

There are many Nintendo 3DS games to choose from irrespective of the genre and the library is increasing its size day by day. However, amongst the thousands of games present for the handheld console, to find out the best games for 3DS for you and kids is a tedious task. The list comprises of best 15 Nintendo 3DS games to start playing the great ones now:

Nintendo 3DS is the home of the ever-running game franchises that are constantly released for the console. The above list of the best Nintendo 3DS games is just an excerpt from hundreds of other presents in the market. If you feel any game, we missed from your precious collection of the best 3DS games and should be there please add in the comments below.

7 Best Ways to Boost FPS in Fortnite on PC

Why Is My Alexa Blinking Yellow or Green? What Do Amazon Echo Light Colors Mean

How to Turn Off Apple CarPlay on iPhone and Car

How to Use Canned Responses (Templates) in Gmail?