Apple did an excellent job on Mac OS X Security to protect their system. Believe it or not, there are at least seven built-in Mac Security Software to protect users from hackers and internet threats. I never knew some of them have existed in my Mac Book Pro. Mac users know Mac FileVault and Mac Firewall but never knew about Mac Anti-malware built-in with OS X, called XProtect. What would be the ideal security software you need, well to protect Mac from online attacks, you may need a Mac Os X firewall, a good antivirus & anti-malware, encryption software, etc.

Here is the list of all built-in security software for Mac and a few of the best alternatives that you can depend on for an additional layer of protection.

XProtect is a built-in layer Mac Anti-Malware protection introduced from Mac OS 10.6 and up words. This Mac Anti-Malware is a File-Quarantine System that compares a suspicious file downloaded from the internet against XProtect file (list of known malware) stored in OS X. Mac OS X warns you when you try to open a suspicious file from the internet. The Mac system will keep alive XProtect by updating the new malware definitions with regular OS X updates.

Mac will keep alive XProtect by updating the new malware definitions with regular OS X updates. There is more detailed information in the article XProtect Built-in Mac OS Anti-Malware. There is no need to activate XProtect; it is automatically turned on to protect your system. Apple introduced the Malware Removal Tool (MRT) from OS X 10.8.3. Like XProtect, MRT removes known malware that matches Apple’s malware database.

Anti-malware & Antivirus for Software for Mac

However, you are not 100% protected with this XProtect. This Anti-malware layer can be bypassed by java applets, torrent clients, software from CD or the same computer network. There are dedicated and powerful Mac antivirus and malware scanners to protect your entire system from these bypassed apps, latest malware and virus attacks.

The famous anti-malware, Malwarebytes Anti-Malware for Mac scans for and removes code that degrades performance or attacks your system. This Mac Anti-malware has custom-built technology detects and removes adware with a proprietary database that can identify over 160 adware variants. This is the light and cleans Anti-malware for Mac that you can install on OS X.

OS X includes an application firewall you can use to control connections made to your computer from other computers on your network. This per-application basis (rather than a per-port basis) firewall protection and helps prevent unwanted apps from taking control of network ports open for legitimate apps. You can turn on this Mac Firewall, from System Preferences > Security or Security & Privacy > Firewall tab > Unlock the Pane by clicking the paddle lock > Click “Turn On Firewall” > Advanced to customize the firewall configuration.

There is no dedicated firewall system we recommend for Mac. Go for a complete Mac internet security software from Mac the include the firewall, adware and several other layers of protection.

Kaspersky Total Security for Mac keeps your Mac safe from viruses, attacks, fraud, spyware, cybercrime and more. This Mac All insecurity protects OS X from phishing, tracking & spying and adds extra security when you are online shopping or banking. Kaspersky’s one license cover all your device like PC, Mac, Android, iPhone, and iPad.

FileVault encrypts Mac’s entire disk, and nobody can retrieve the data from your drive without knowing the firmware password. 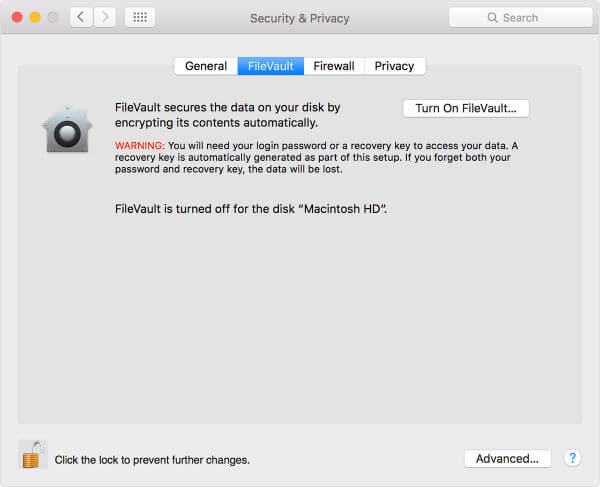 Apple introduced gatekeeper from OS X 10.7.5 version, the second layer of protection for Mac OS X. By default, GateKeeper allows the apps that is digitally signed by a developer with a certificate issued by Apple to install on OS X. According to Apple, Gatekeeper makes it safer to download apps by protecting you from inadvertently installing malicious software on your Mac.

Mac user chose the right source for apps to download, System Preferences > Security & Privacy > General > Allow apps downloaded from > Select; Mac App Store, Mac App Store and identified developers, and last one Anywhere (not recommended). More details can refer from Apple OS X: About Gatekeeper. The GateKeeper can easily be disabled by the user, or Malware attacker can successfully bypass it and install software on Mac.

Find My Mac is a tool for most of the Apple products to track the lost device. However, this can’t be categorized into a protection tool but this is a critical tracking tool when you lost your device. With Find My Mac, you can locate and protect your Mac if it’s ever lost or stolen. To use Find My Mac, simply turn it on in System Preferences > iCloud. You need to set up Find My Mac before it goes missing. Please read the more details about this Mac Tracking tool, check to Find My Mac

There are a bunch of third-party good tracking apps for Mac. Prey is an open-source free Anti-Theft solution for tracking device & protection that can be used in all your mobile and computer devices for free. With this Prey Tracking tool, you can get pictures, location, data wipe and recovery from missing devices.

Apple did an excellent job in implementing security for Mac at different levels. However, these Mac security software apps are not frequently updating like another third party Mac internet security software. Sometimes, these inbuilt protections are not enough to keep OS X safe. There are thousands of email phishing links, fake ads and URLs, Adware, malware, virus, key-logging scripts, and password-stealing scripts are ready to intrude into your system anytime.

You are not safe anymore and be careful while clicking on links and downloading files. Sometimes, your Mac OS X security software won’t be able to block all of them while you connect Mac online. These third-party Mac Security apps can offer you an additional layer of protection if you are in a zone of high-security alert.

How to Use Alexa Echo to Setup Intruder Alert?

How to Fix iPhone Keyboard Not Showing Lowercase

How to Install Google Playground & AR Stickers on Any Android

How to Setup Plex Media Server And Use Plex For Free

12 Best Offline Games for Android to Play without WiFi