Let’s see how to change the Apple Watch Screen Orientation or flip the screen to wear the watch on the right or left hand.

You can change the Apple Watch Digital Crown Orientation from the watch Settings. You don’t need to go to the paired iPhone to do this.

Here you can select the convenient position of Watch’s Digital crown. The Apple Watch Screen will flip when you choose the left or right Digital Crown orientation.

The screenshots above displays the screen position of the Apple Watch Screen with Left/Right Digital Crown position. 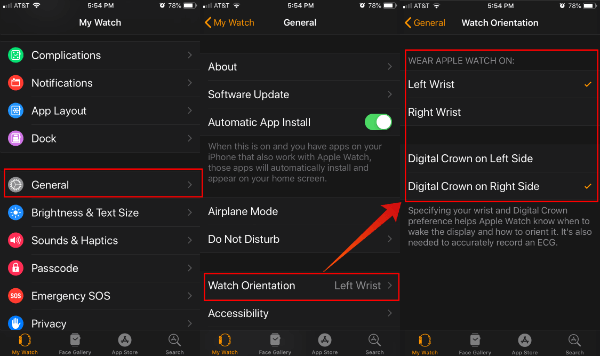 How to Get Memoji Watch Face on Your Apple Watch

Apple Watch gets a bunch of cool watch faces and other features. With the Watch app on your iPhone, you can customize and create...
Read more
SmartWatch

How to Create Your Memoji on Apple Watch

Memojis on iPhone is quite a thing, you can make it look like you and share it with your friends. You can send Memojis...
Read more
iPhone

How to Find Apple Watch Backup Files and Delete

The Apple Watch backup to iPhone occasionally. It's not very common to create the backup files from Apple Watch. However, Apple Watch will back...
Read more

Is Your Apple Watch Compatible with WatchOS 6?

Great News for Apple Watch owners. The new Watch OS 6 is compatible with all of the watch models except Apple Watch 1st Generation....
Read more

How to Use Apple Watch to Auto Unlock Mac

Apple products have greater sync and compatibility with each other compared to any other gadgets in the market. If you have been unaware all...
Read more

10 Best Sports App for Apple Watch to Get Live Score

Are you a serious sports fan looking to get live scores right from your Apple Watch? With Apple Watch, you can easily get sports...
Read more

Winter is coming up and you should be prepared. It can be really frustrating to go out and get caught in bad weather. This...
Read more

How to Set Up and Use Handoff on Mac?

Apple’s feature named Handoff lets you pick up the work on any of your Apple devices from where you left on the other. If...
Read more

Many Watch users, like you, are facing issues with the Battery life of the Apple Watch. Many tried a few generic methods they would...
Read more