Google Lens: How to Get on iPhone, Android and Use Google Lens?

Google Lens, a visual search tool with A.I., is a powerful app to recognize the images with an Android phone camera and get the results based on the image. Google is rolling out the Google Lens app to more Android devices and PlayStore apps. You can use Google Lens to scan a barcode, find out a music album or book, get the information of a historical place, etc.

Let us explore more about Google Lens and see how to download, enable/activate the app. Read below for more information to know how to use Google Lens with Google Photos and Google Assistance.

What is Google Lens?

Google lens is one of the powerful image recognition app developed by Google announced during Google I/O 2017. Initially, Google Lens features were integrated with Google Pixel2 Phone and latest flagships. Recently Google launched a standalone app for other phones. This Google App has powered with A.I. capable of identifying images (with image search algorithm) and texts (OCR Technology). With the latest updates from Google, the Lens features are available with Android Camera App, Google Photos, Google Assitance, etc.

What can Google Lens do?

The A.I integrated Lens app can recognize the image and bring the result based on the image. The text scanning feature can scan the image, convert to text, and translate into English. There are a bunch of other things that can do with this powerful app. 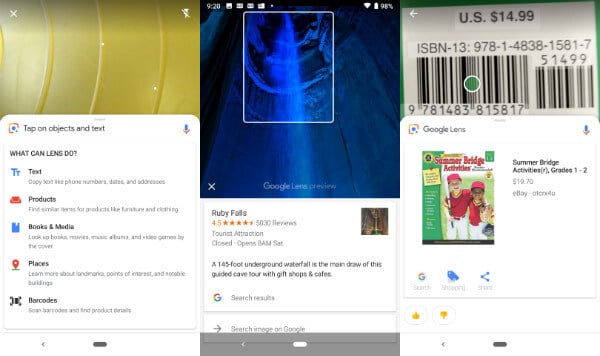 The list is not going to end here. Google is integrating the A.I. powered Google Lens app with other apps like Google Assisnathnte and Android Camera app to improve the performance.

How to Activate Google Lens?

Android users can Download Google Lens app from Google Play, as a standalone app for Google Lens. This standalone version is available for very limited Android phones with latest OS. Unfortunately, there is no dedicated app for iOS users yet. Even though the dedicated app is available for Android users, the app is not compatible with all Android phones. The compatibility depends on the phone make and the phone camera. The second option to download Google Lens APK file. We do not recommend to download or use APK file from other websites, that may be harmful to your data and phones.

How to get Google Lens APK?

How to get Google Lens for Android?

Android users have multiple options to try this app on their phone. Google Lens is already integrated with Google Photos and Google Assistance that is available for most of the Android phones. In addition to this, you can download Google Lens app from play store if you have a compatible phone. And the last option is to get a Google Lens APK and the link provided in a separate APK section in this article.

The dedicated app can be installed from the link provided below. If your phone is not compatible with the standalone app, then install Google Photos on Android, select and photo and tap on it. Now you can see the Google Lens icon on the screen along with the picture. Similarly, Google Assistant is also integrated with Google Lens, and you can see a tiny Lens icon when you use Google Assiantnce on compatible Android phones.

How to get Google Lens for iPhone? 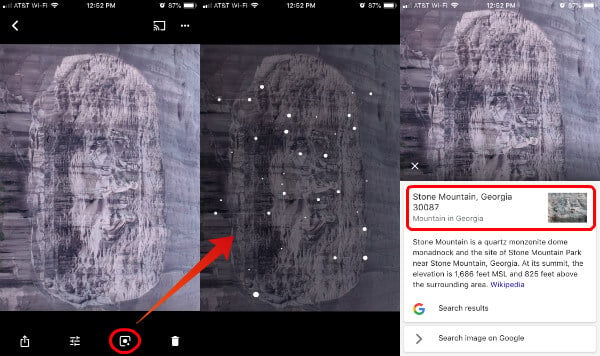 Depends on the image, you can get different information or while using the app. For example, if you have a barcode image, Google Lens will scan the barcode and bring a different result.

Related: How to Measure Distance and Area with Google Map/Google Earth?

How to get Google Lens on Pixel 2?

Related: How to Replace Measuring Tape with Google Measure App?

How to Enable Google Lens?

There is no need to do any setting change to enable Google Lens. For Android users, the Lens app is coming with a couple of apps. Android users can use this app features with Google Assistance to recognize an object or to read a text. When you open individual images in Google photos, you can get the Lens icon to recognize the image and take action. And for iPhone users, so far the only option to get Google Lens is Google Photos.

How to use Google Lens with Google Photos?

Google Lens is a part of Google Photos. It is available for all Android users that have Google Photos app. Once you have google photos app, you can detect the image, read text on the image and many other things. Let us see how to use Google Lens with Google Photos. 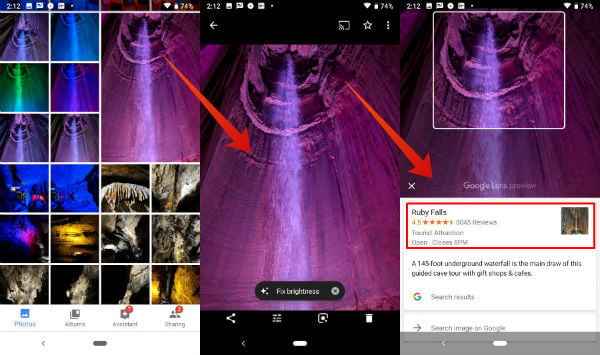 The last part is tricky here. Google Lens will produce the result based on the image. For example, if you take a cover page of a book, Google will detect that and provide you the information about the book. If you take an image of a historical site or structure, Google will recognize that. You can take an image of an animal and Google will do the best guess based on the image recognition system integrated with Lens app. There are a lot of additional things you can do.

How to use Google Lens with Google Assistant?

With the latest updates, the Lens is coming with Google Assistance app. This Google Lens feature is available only to the latest Android flagships like Pixel 2. This screenshot is from Pixel 2 is running on Android P. Follow the steps to use Google Lens on Google Assistant with your phone. 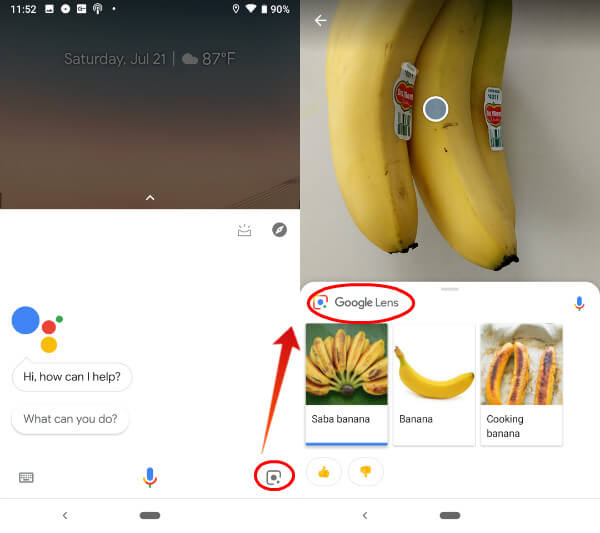 If your phone is compatible with Google Assistant and not installed yet, please download from the PlayStore with the link provided below.

How to use Google Lens with Android Camera? 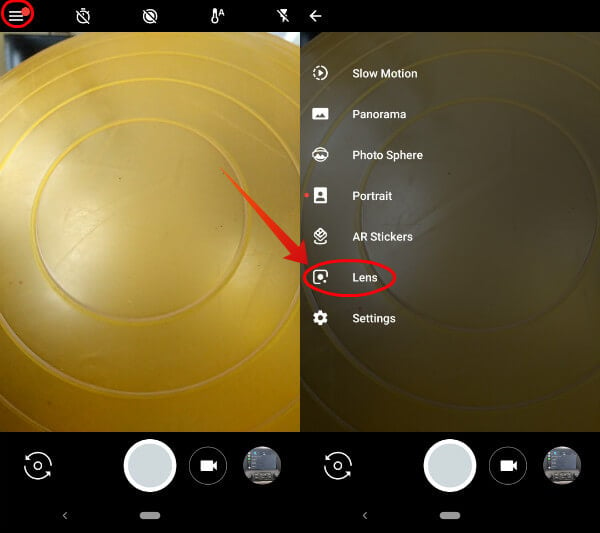 At this time, there is only limited phone models are available with Google Lens on the Camera app. If you don’t have the integrated app, either you have to wait for next updates of search the phone compatible with this feature.

How to use Google Lens Translate?

If you have Google Lens installed phone, you can convert an image to text (OCR) and translate to English. 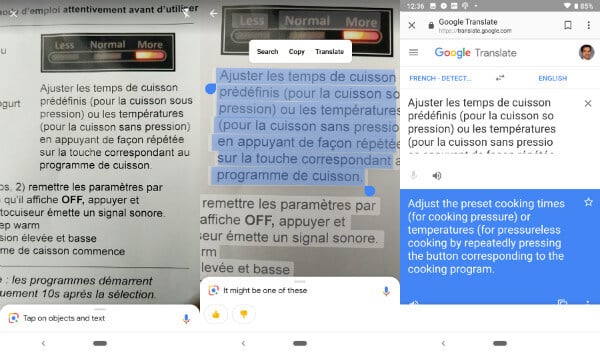 The Lens app actually is converting the image to OCR text first and sending to Google Translate function to translate the text into English.

How to see Google Lens Activity? 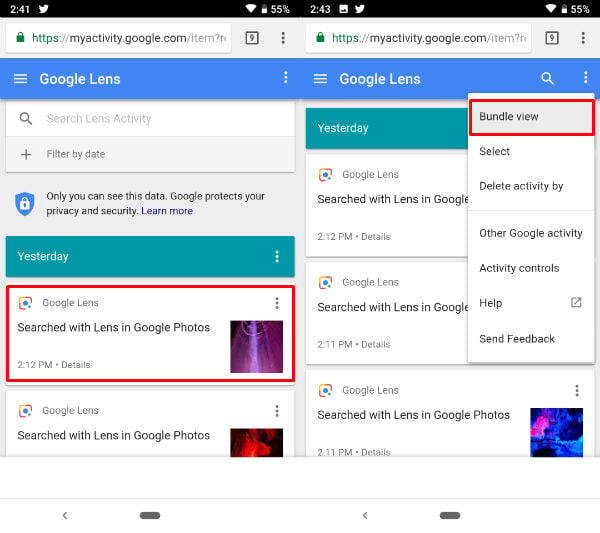 How to Delete Google Lens Activity? 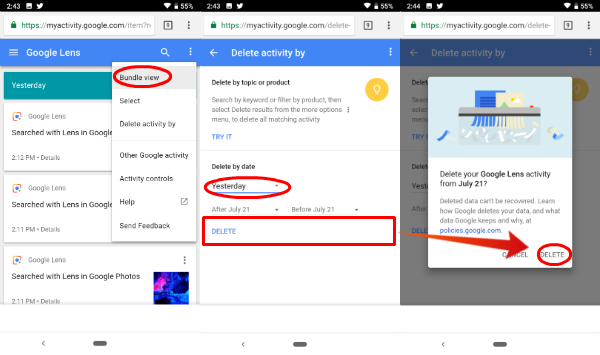 Google Lens is a powerful A.I. integrated app from Google that can recognize the images, text, and objects to detect. We would say Lens is an image search engine with additional features like barcode scanner or Google Translator. Eventually, we will see this Google Lens app integration with more apps and gadgets.

How to Get Mac Like Dynamic Desktop on Windows 10

How to Send Large Files from iPhone to Android/PC

Cannot Find an Installed App? See How to Unhide Apps on iPhone