Apple’s one of the recently announced major release is the macOS Big Sur. The new version of macOS comes with major improvements in design and features, especially in security. As usual, Apple has planned to release the macOS Big Sur to the general public after the developer beta as well as the public beta tests. Meanwhile, you must be setting up your Mac or MacBook to get the latest macOS Big Sur update. Have you checked whether your Mac is compatible with the forthcoming macOS Big Sur update?

Here is a complete list of all macOS Big Sur compatible models, how to get the update, and more.

The macOS Big Sur is rolling out by Apple for all the Mac series devices, including iMac, MacBook, Mac Mini, Mac Pro, etc. However, it would not be supporting all the models. Here is the complete list of all the macOS Big Sur compatible Mac models. 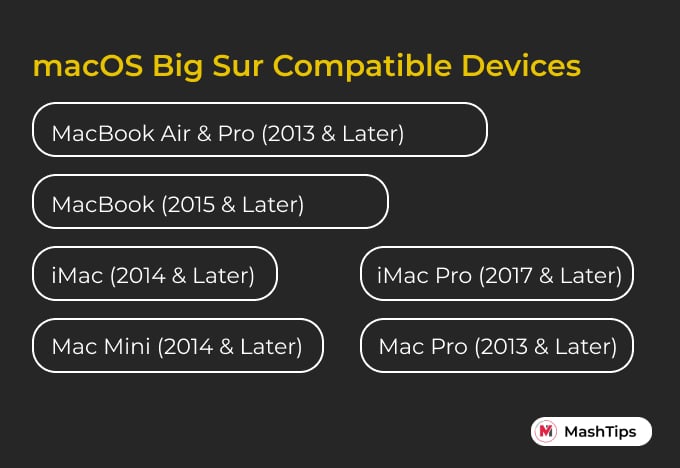 You can see from the above list. The Mac models from 2012 that had the macOS Catalina are no longer in the list of future macOS updates. Some of the Macs that are missing out the upgrade for the latest release are MacBook Air (2012), MacBook Pro 2012, Mac mini 2012, iMac2012, and iMac 2013.

As of now, the macOS Big Sur Public Beta is out for everyone. You can download and install the Big Sur Beta version before the official final release. In case you are expecting a flawless experience, you should wait until the final stable release of macOS Big Sur is out.

What to Do Before Installing macOS Big Sur Beta?

As mentioned above, if your Mac is compatible, you can get the Beta profile right away and start using the macOS Big Sur Beta. You need to install and use the Beta versions by understanding its risks and limitations.

Anyways, here are a few things you should keep in mind before thinking of downloading and install the macOS Big Sur Beta.

What Can I Expect With macOS Big Sur?

Big Sur features a revamped user interface and has optimized Safari to boost the speed. Additionally, it comes with major tweaks in Messages, Photos, and Maps.

Is it Safe to Install macOS Beta?

Beta versions are used for testing purposes. It is mostly unstable and would probably have bugs. So we recommend not to install macOS beta on your primary Mac as it can cause random crashes.

When is macOS Big Sur Releasing?

The macOS Big Sur developer beta is already available to download and install. The public beta is coming soon for everyone to try, and the final general release will be available this fall.

Who Can Join the macOS Beta Program?

Apple’s beta program for macOS Big Sur is now available for both public. The public beta is for anyone who wants to test the new OS before the final release.

How to Get macOS Big Sur Public Beta?

Follow the below steps to join the macOS Big Sur public beta program.

After installing the new macOS Big Sur Public Beta on your Mac, you can continue using, without losing any data or user accounts.

How to Show Hidden software in Add/Remove Programs?