How to Take Intruder Snaps and Email from Android

With the rise of demand and popularity of Android devices, the risk of security threats has significantly increased. With the not satisfactory mobile security currently offered by the manufacturers, installation of one of the best phone security app, serves as a great deal.

This is good to protect your device when your friends or someone else tries to intrude on your phone. Through the features like track my phone and locate my Android of the security apps easily get back your device when lost.

Being extra cautious is not wrong as it assures to be free from the worry of the phone getting hacked and the contents being released on the internet. The thought is itself very scary that all the data of your phone is leaked all over the internet, accessible to every person around the world.

In order to avoid any trouble from hackers and fraudsters gaining access to the data on your smartphone or tablet, there are many apps available for giving you a better assurance of safety. For demonstrating the uses and efficiency of the security apps, we have chosen CM Security AppLock Antivirus.

CM Security AppLock Antivirus by Cheetah Mobile (AppLock & Antivirus) is one of the best phone security app that can be downloaded from the Google Play Store. With the app you can develop a barrier in your device for the people that are nosy, snooping around to check all the contents present in it. CM Security AppLock Antivirus also inherits the Track my Phone and Locate my Android helping you to get the exact location of the your phone on the maps.

The app besides has an intruder selfie feature that makes it a unique app from other similar apps. Through the help of this feature, the app takes the photo of the person who is trying to unlock the device repeatedly by entering the wrong password. It catches the snooper instantly and gives the notification of the same via email. Follow these steps in order to know how to take snaps and send to email when someone try to unlock your phone.

Install CM Security AppLock Antivirus on your device and the first thing you have to do is to make sure that your device is free from the risks. Tap on the Scan option to detect the threats, in just 5 seconds the app detects them along with the junk present and cleaning them. For activating the Intruder selfie mode, you have to click on the App Lock, where it will ask you for the apps that you want to be locked. 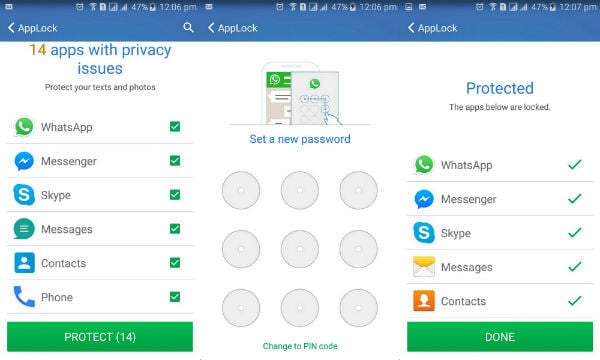 After selecting the apps you have to draw your pattern and confirm your pattern twice, then you will be taken to AppLock menu. For screen lock selfie mode, you have to head to settings of AppLock and scroll down to Screen Lock Intruder Selfie, tap on the checkbox to enable it. You can also change the incorrect attempts from 3 times to 1 or more to make sure that no other person is able to open the device than you.

You can choose any other mailbox in order to get the snaps through email. For extra protection you can also use the invisible pattern feature so the person standing behind is unable to see the exact pattern. If you want to delete the old intruder selfies, just then go to AppLock and tap on the intruder selfie option for the photos of the people that tried to unlock your device. Select the pencil icon on the top-right side of the app and choose the photos. Delete the selected photos by tapping on the trash bin icon. 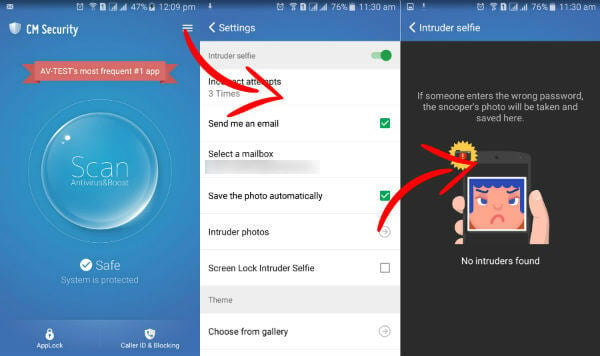 The Junk cleaner of the app requires additional download and is often accompanied with annoying ads. There is no presence of encryption and the UI lacks originality.

There are many alternative to CM Security AppLock Antivirus helping you to get the accessibility with a diverse approach.

You can choose CrookCatcher – Anti Theft, working pretty easily and clicks the photo of the person trying to unlock the device. It guards your phone and tablet as a secret photographer always there to click the photo of the person on unlocking failure. There are a lot of things that needs improvement in the app and one of its main features struggles during working.

Lockwatch – Thief Catch is also one of the best security app running only when the wrong unlock is entered. If you don’t the features like Locate my Android and track my phone on your device other than intruder selfie, then it is the best choice.

Related: Best 7 Free Apps to Lock your WhatsApp and Facebook in Android

It gives you the photo along with the GPS tag to easily locate the device. It has in-app purchases and lacks some features, making the person to download other apps.

You Can Now Unlock iPhone Face ID While Wearing a Mask; No Apple Watch Required

10 Best Folding Electric Bike to Carry with You

Ok Google is not Working on Android, How to Fix?

How to Set Up Google Alerts to Track News