The new Back Tap feature on iPhone lets iPhone users take screenshots and even trigger Google Assistant with a tap on the back of their phones. We have already discussed how we can get the same on your Android phone with screenshots. Now, you can also turn on the flashlight on Android by tapping the back of the Android phone.

Let us take a look at the best possible method to turn on the flashlight on Android by back tap, just like on iPhone.

Turn on Flashlight With Double Tap on Back Of Your Android

That’s pretty much it for the most part. You can now turn on the flashlight with a double-tap on the back of your Android. Naturally, this also works with Triple taps if you selected that.

Related: 10 Best Song Finder Apps for Android to Identify Music on the Go

Configure When Flashlight Will Turn on With Double Tap

It’s quite possible you’re worried about accidental taps. Although generally, Tap Tap is good at not registering false taps inside the pocket, there’s always a chance you could bump into something that triggers the gesture. That can be avoided by setting up Requirements. 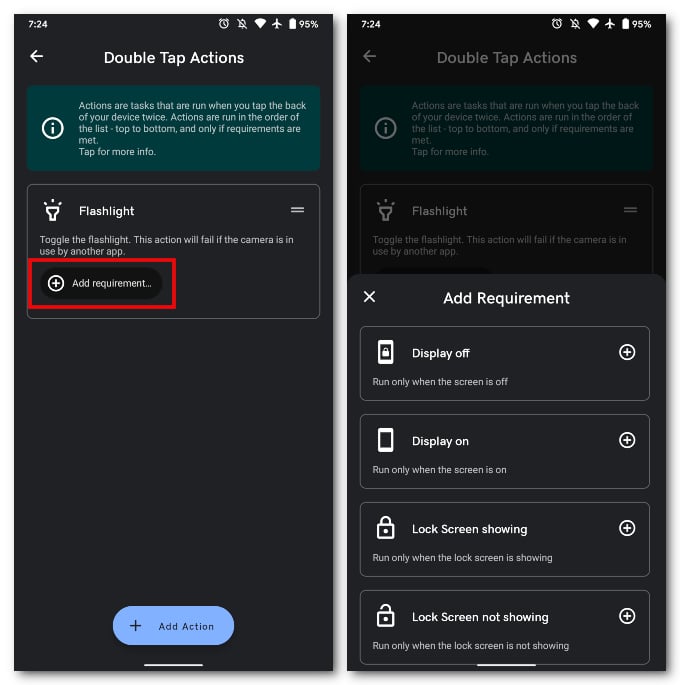 This ensures that the double-tap to turn on the flashlight only works when the screen is on. There are other requirements you can set up in addition or in place of Display on as well. We encourage you to try and experiment and fiddle with the configurations to better configure it to your needs.

You can set more than one action for the Double Tap gesture and similarly for the Triple Tap gesture. The app will prioritize actions based on the order in which they appear. So, the action at the top will have the most priority. That is, of course, as long as the defined requirements for that action are met.

How to Change Bluetooth Audio Codec of Your Android Device

10 Best Android Auto Navigation Apps to Get Directions While Driving