OnePlus has earned a reputation as being one of the best OEMs in terms of its software strategy. The company’s OxygenOS skin keeps Android it clean and simple, facilitating faster software updates that the company is known for. The Chinese OEM has already released Android 10 based OxygenOS 10 for the OnePlus 7T/7T Pro, OnePlus 7/7Pro, and OnePlus 6/6T.

OxygenOS offers more customization options compared to stock Android, but it doesn’t go quite overboard as something like MIUI. OxygenOS still give you plenty of options to customize Android 10 on Oneplus devices. In no particular order, these are the top 10 Android 10 customizations you can do on your OnePlus phone. 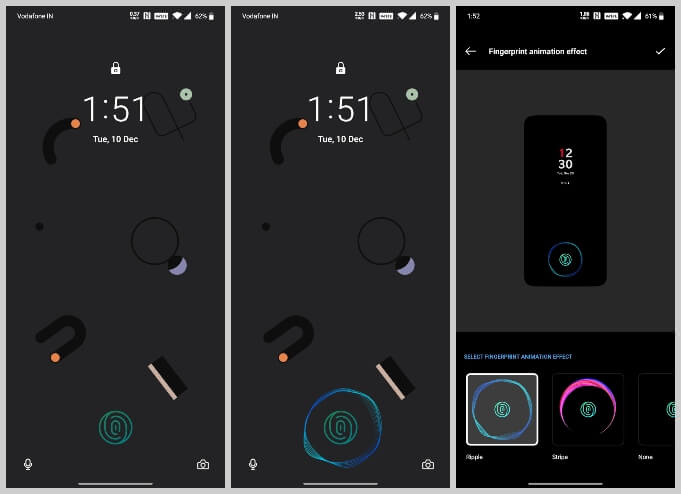 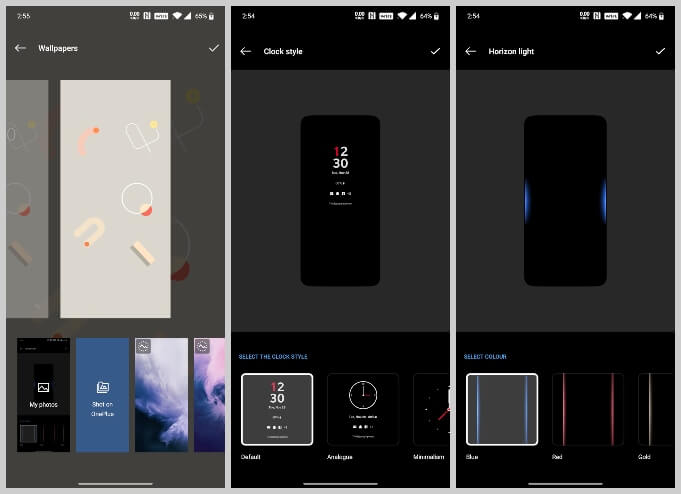 Exactly where you find the fingerprint animation, i.e., Settings > Customization under the LOCK SCREEN CUSTOMIZATION, you’ll also find the other customization options for the lock screen. These include basic things like changing the wallpaper as well as some advanced ones such as changing the clock style and the color of the horizon lights.

All the customizations you find here for the lock screen are merely visual or cosmetic. Android 10 on OnePlus lets you further customize the lock screen with actually useful features. But we’ll get to those in a bit.

Also read: How to Use Android Smartphone as a Security Key 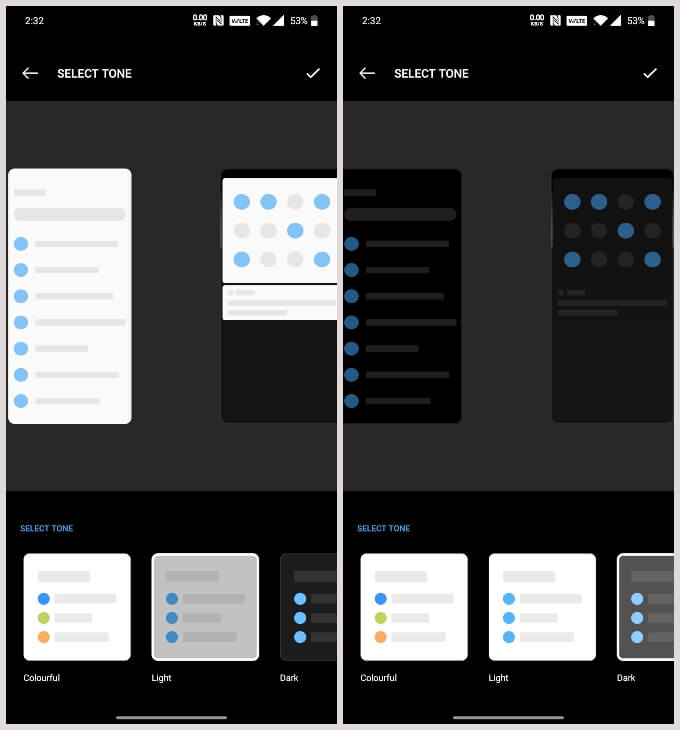 OxygenOS has had a dark theme well before Google added it to Android. However, with Android 10 not only system apps but also apps downloaded from the Play Store and other sources can switch to dark themes. The dark theme on OxygenOS 10 definitely gains from this. It used to previously be located in Settings > Display > Theme.

To customize the system theme on OnePlus running Android 10, you’ll have to go to Settings > Customization and select Tone under SYSTEM CUSTOMIZATION. From here, you can opt for a Colorful, Light or Dark tone.

The Colorful tone is still a light theme but with colorful action bars for system apps like Settings, Dialer, Messages, etc similar to the older material design themes.

Instead of choosing a Tone, you can also simply select a Preset Theme in Settings > Customization. These are Vibrant tints, Illuminating light, and Nuanced dark which essentially apple the Colorful, Light, and Dark tones respectively along with other default OnePlus configurations. 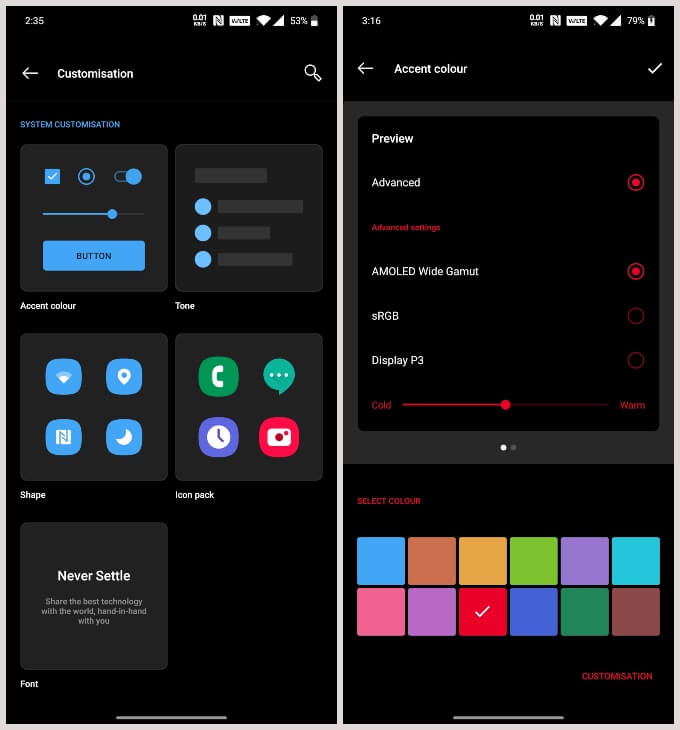 Under SYSTEM CUSTOMIZATION in Settings > Customization, you can also find various other options to customize Android 10 on your OnePlus device.

These options include the ability to change the Accent color which has been an OxygenOS feature for a while. Android 10 on OnePlus also lets you customize the icon pack and this is system-wide instead of just being applied to the home screen. 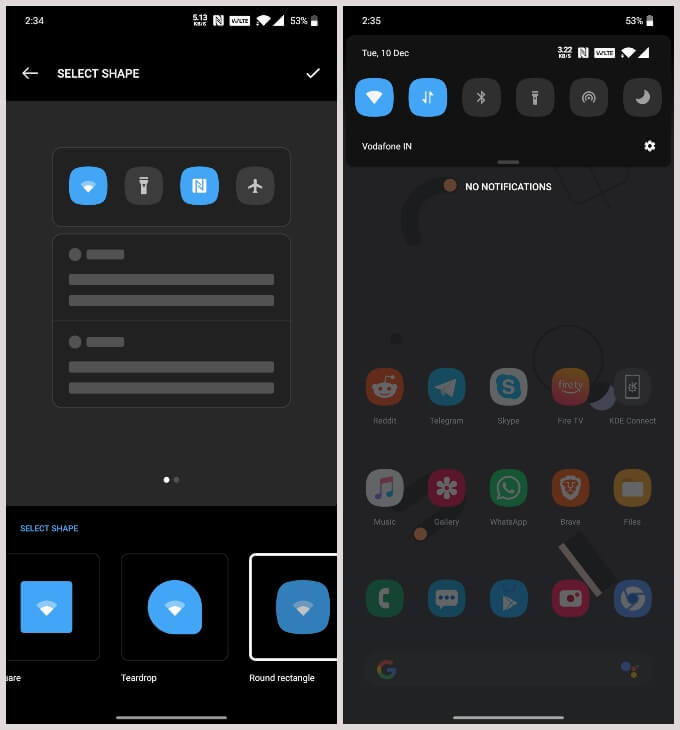 Another new option on OxygenOS is the ability to customize icon shapes system-wide, thanks to Android 10. You can choose from a Round, Square, Teardrop, and Round Rectangle.

Also read: How to Customize Google Home for Indian Users? 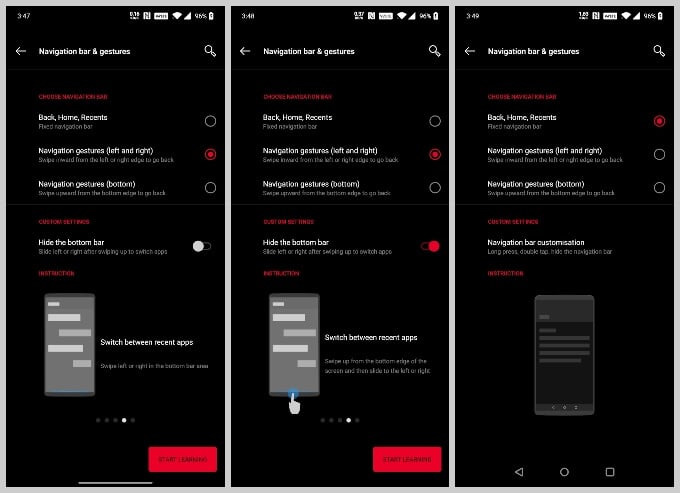 Last year with Android 9, Google attempted its own take on gesture navigation. It received some negative reviews and rightly so. With Android 10, Google decided to just implement iOS-like navigation gestures. This time the company was a bit cautious and allowed users the option to choose between their preferred navigation. OnePlus has been doing this for a while now. 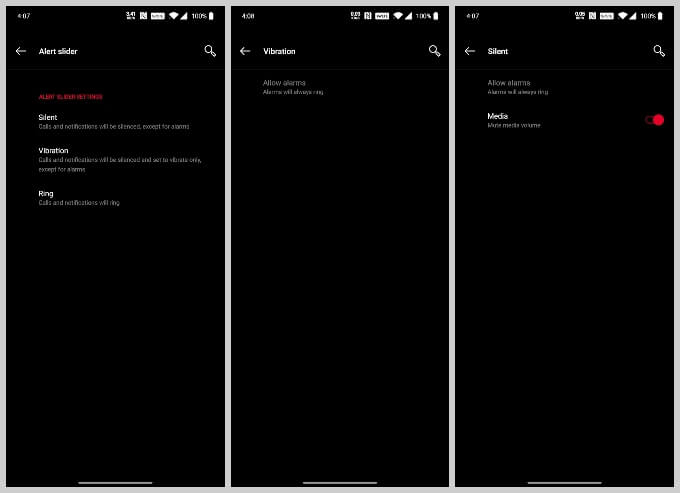 OnePlus is the only mainstream Android smartphone that comes with an alert slider. Like the iPhone, OnePlus’ alert slider has three positions to switch between the three ringer modes: Silent, Vibrate, and Ring. In Settings > Buttons & gestures > Alert slider, you can further customize these.

For example, you can choose to let media play at normal volumes even in silent mode or let the device vibrate when in ring mode for calls.

Also read: How to Setup and Customize Google Assistant on Android? 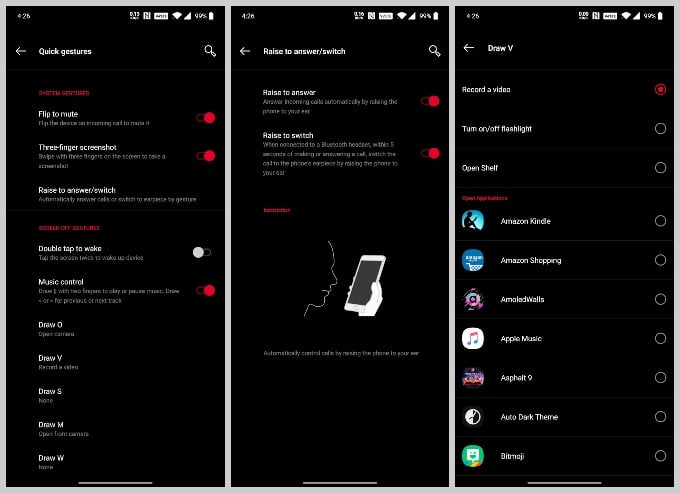 OnePlus’s OxygenOS has always had some gestures to improve the overall experience. This includes things like raising the phone to your ear in order to pick up a call.

Android 10 on OnePlus devices lets you customize these gestures a bit easier while adding a few gestures. All these gestures can be found in Settings > Buttons & gestures > Quick gestures.

8. Enable Quick Launch on One Plus 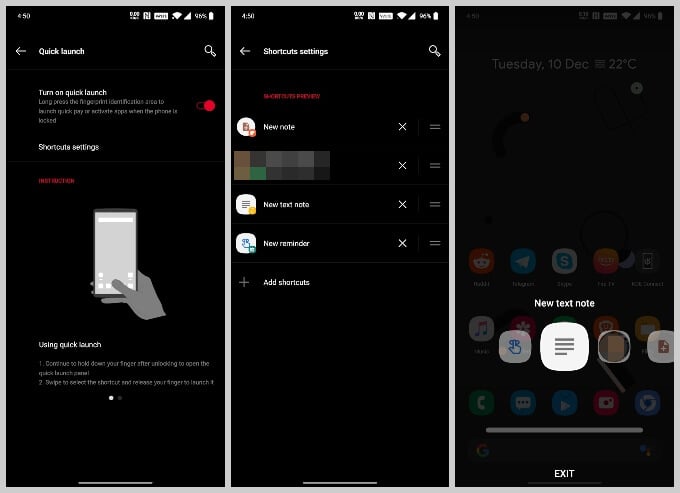 Another advantage of having an on-screen fingerprint reader is the ability to quickly launch apps with it. The quick launch is an intuitive feature that many might not use.

However, it is a feature that once you get used to, you wouldn’t want to live without it. It can be enabled and customized in Settings > Utilities > Quick launch.

Once set up, all you have to do is long-press on the fingerprint reader and not remove your finger once it is recognized. You’ll then be able to slide your finger left or right to select one of your shortcuts or apps to quickly launch them. 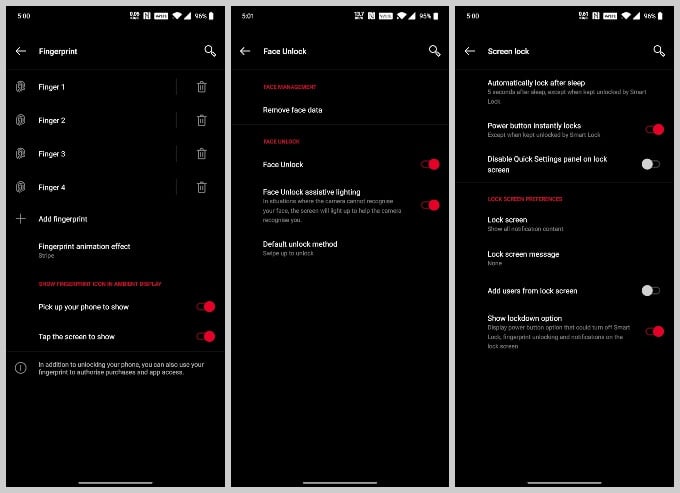 Since OnePlus devices don’t feature an Always-on Display, getting the on-screen fingerprint reader to show up can easily be a hassle. Fortunately, OnePlus has baked in some options that make it almost as easy as having a regular capacitive fingerprint reader.

Just go to Settings > Security & lockscreen > Fingerprint and enable the two toggles under SHOW FINGERPRINT ICON ON AMBIENT DISPLAY. These are labeled Pick up your phone to show and Tap the screen to show.

Next, you can also customize a few things about the OnePlus face unlock on Android 10. OxygenOS 10 gives you the options to decide whether the screen unlocks instantly upon recognizing your face, or should you have to swipe up to unlock the screen.

There’s also the option to provide assistive lighting for face unlock since OnePlus devices don’t have the infrared sensors. This works by making the screen a bright white, which can be blinding (figuratively) in the night. Finally, you can tap on the cogwheel icon next to Screen lock to customize a few other things as well.

Also read: How to Customize Microsoft News App for Favorite News in Windows 10 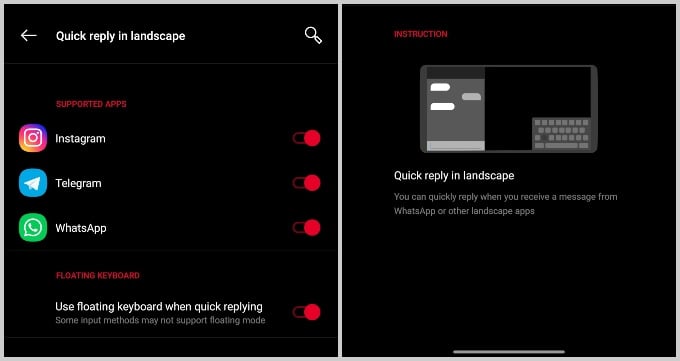 OxygenOS is known for packing in intuitive features that make using your smartphone a little easier. A quick reply in landscape is one such feature. You’re playing a game or watching a video in landscape and you get a WhatsApp notification, for instance, that you need to reply to. There is a serious lack of vertical space in landscape mode on smartphones these days with the 18:9 and 19:9 aspect ratios.

As a result, the keyboard ends up pushing on top of the notification making it difficult to see what you’re typing. Quick reply in landscape solves this problem by moving the keyboard to one side and the message you’re typing to another because there’s a lot of space horizontally.

To enable it, go to Settings > Utilities > Quick reply in landscape and turn on the toggle next to Use floating keyboard when quick replying.

OxygenOS 10 on OnePlus devices is loaded with several neat and nifty features such as the ones mentioned above. While it wouldn’t be possible to mention each and every one of those, these were our top 10 things to do to customize Android 10 on a OnePlus device running OxygenOS 10.

How to Customize Your iPhone Lock Screen

How to Set Video as Live Wallpaper on Windows PC