A Solution for Quick Copy & Paste Image and Text in Android

We all have been there when we wanted to copy some content from one application to somewhere else and feeling extremely frustrated during the process of establishing it. The traditional method is to hold down the content and place the content you need to copy between two grabbers. Placing the grabber in the exact position you want to, is a real pain as the text sizes are always going to be of pinch size.

The frustration reaches the zenith if the particular application has disabled the option to grab the content altogether. This phenomenon is on the rise among apps as they are in a constant race with each other, that they don’t want to be in common ground.

The loss is the end users’ who gets caught in the middle of the app tug-of-war. The number of apps which cannot talk to each other is growing day by day.

The Garage, Microsoft’s initiative to promote experimental ideas which produced Arrow Launcher, Sprightly etc. has produced another app.This particular app could be groundbreaking to the users’ aforesaid issue, by launching Clip Layer.

Clip Layer has a simple to understand working methodology. It applies a universal overlay over any screen it is called on. You can select whatever information you want to copy by this method.

Once you complete installation of Clip Layer from Play Store you are required to change your Assist App to Clip Layer. 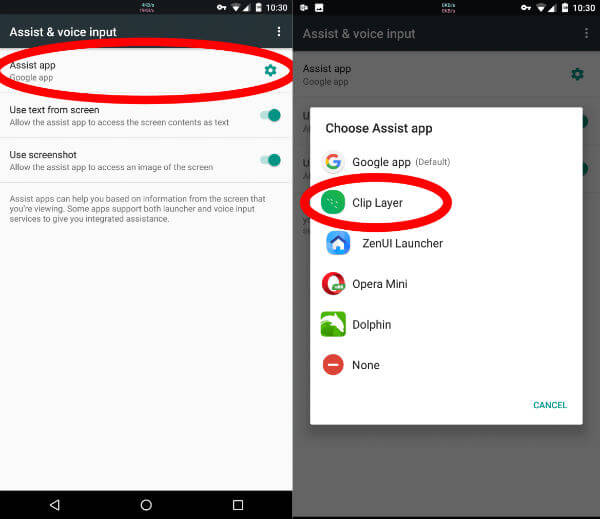 On most of the Android Devices, Google Assist is the default Assist app. You have to select Clip Layer as default, assist app by tapping on assist app and choosing Clip Layer.

Step 2: Copy the Content and Use on other Apps 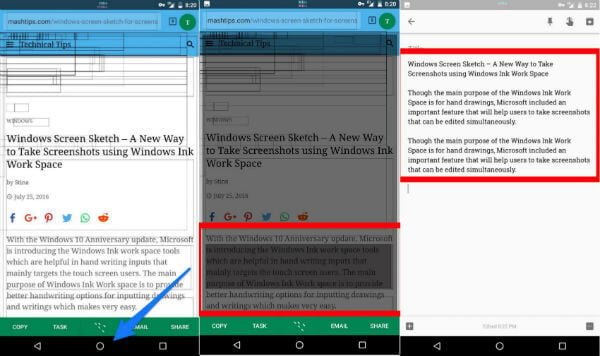 You can either open any app, as in the example above, and paste it there or share it to other apps or save to Wunderlist as a Task. A direct E-Mail option is also provided by the app developers.

The app is expected to streamline copying of text content across your social networks and apps, even if the native grabber has not given permission to do so. Steve Won, the developer of Clip Layer had previously developed Hub Keyboard in Microsoft’s Garage platform which, according to him had made him familiar with the coding process required and the formalities involved in app development. Steve’s previous product was to compose, while his latest product focuses on reproducing what already exists and sharing and reusing it.

The app has a great potential to become an essential tool for more users if it can iron out a few issues. The primary one being that the requirement to sacrifice Google Assist, which many users may not be willing to do right away. Secondly, the snip recognition will require improving in precision if it is to really replace the traditional grab method.

Facebook
Twitter
Pinterest
WhatsApp
Telegram
Previous articleHow to use Waze as Standalone GPS Device?
Next articleHow to Turn Off Waze Location Service Complete to Save Battery

When you clog up your hard drive with too much data, your PC will eventually start to slow down. Disk space analyzer tools on...
Read more
Android

Having the best PDF reader app on your Android device is a must these days. The PDF file format is widely used these days...
Read more
Tablets

iPads are equipped with high-end processors, 4K video cameras with image stabilization making it top-of-the-line. Shooting a video is just the first half. The...
Read more

Mortgage loans and EMIs drain a large part of your monthly income. A small extra amount you throw into a monthly payment makes a...
Read more

Word processors are arguably one of the most used application software for creators. The iPad serves as a great tool to create and edit...
Read more

The trend of selfies struck its chords in the minds of youngsters. Android selfie app helps you to take the perfect selfies and provide you...
Read more

How to Install Google Sound App on Your Android Phones

Google Play Store for Android has millions of apps and the same goes for App Store for iOS. There are tonnes of apps under...
Read more

Emojis are great, work in full harmony and more comfortable to commune our feelings in any language without typing a word. You can say a...
Read more