How to Use Google Recorder App on any Android Phone

Google offers the Recorder feature with its latest flagship smartphones Pixel 4. This voice recorder app is much better than most other recording apps out with simple UI and offline features it offers. A lot of Android users would love to use this Pixel 4 Recorder app on their devices.

We are here to show you how to Use Google Recorder App on any Android Phone. You can also learn more about the offline transcribe features and search function on this recorder app.

The new Pixel 4 devices from Google include various smart features. These features use artificial intelligence to make your life easier. And this can be seen in the Google Recorder App which is a smart voice recording app.

The most useful and important feature of this app is that it offers live transcription. In simpler words, this feature converts your voice to text as you are speaking. This feature can be quite useful to have on an Android device in various scenarios.

If you are taking notes or recording something important, this feature can be quite helpful. The transcribed text that this app offers can be easily copied and used in any other app on your device. A great thing about Google Recorder is that it supports multiple languages for the transcription feature.

Apart from all of this, the recording quality offered by this app is as good as it gets. Because of the transcription, a lot of Android users would love to have this app on their smartphones. 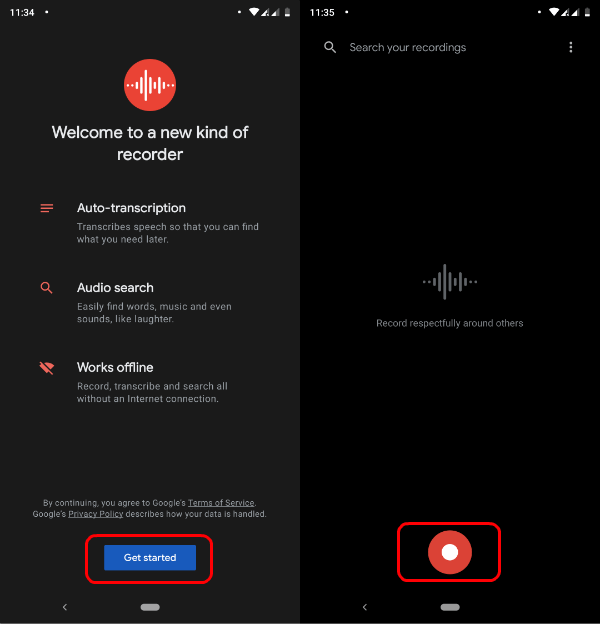 There are various other features and options offered by the Google Recorder app. These can be quite useful while recording audio on your phone. Whether you have installed this app on your smartphone or not, you should know its major features.

By knowing more about such things, you can use the Google Recorder to its full extent. So, if you are interested in this voice recording app for Android devices, make sure to go through its following features one by one:

The signature feature offered by Google Recorder is the live transcription option. As told earlier, it allows this app to convert your voice into text. You can then use this transcribed text in any other app installed on your smartphone.

While you can use any other voice recording app on your smartphone, all of them one major flaw. If you have a large recording file, then finding its certain parts can be quite difficult. Thankfully, that is not an issue in the Google Recorder app. It allows you to search for any specific words or phrases of your choice. And then it shows you the timestamp for it using the transcribed text.

An audio clip recorded using your smartphone can have various kinds of sounds. And Google Recorder is able to distinguish between these which can be quite handy. It detects the difference between someone speaking, music playing, or other ambient sounds. Once it has done this, it will simply color tag the various parts of your audio recording for easy access.

The best part of the Google Recorder APK is that it is able to offer all of these options even if you are offline. As a result, you can use this app for recording audio without an internet connection. This can be quite useful while you are traveling and do not have access to the internet.

Related: How to Add Lock Screen Profile Picture to Android 10

Install Google Recorder on any Android?

Now that you know more about the Google Recorder App, the chances are that you would love to install it on your device. But this app is officially available only for Google Pixel devices. Due to this, you cannot install it from the Google Play Store. Instead, you have to get its APK file which you can then use to sideload the Google Recorder app on your smartphone.

While there are various websites that you can use to download this app, we will be using APK Mirror. It offers the latest version of Google Recorder APK file which can be downloaded from here. You have to download this exact version of this app, otherwise, it will not work. But make sure that your smartphone is running Android 9.0 or higher otherwise this app will not work for you.

Once you have successfully downloaded the APK file for Google Recorder, you can go ahead and install it on your device. Thankfully, installing Google Recorder via its APK file is quite easy. It is similar to sideloading any other app on your smartphone. But if you have never done that before, you can run into issues.

Android does not allow its users to install APK files by default. This is to protect your smartphone from possible security threats. Your device can face various issues due to malicious APK files. Therefore, if you wish to Install Google Recorder on your Android device, simply follow the given instructions one by one: 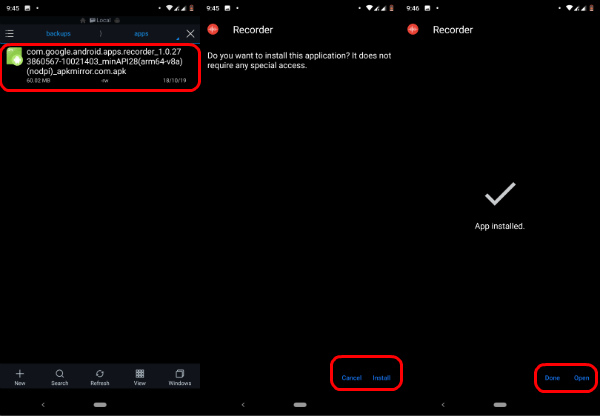 At last, you can start using the Google Recorder app on your smartphone to enjoy its various features.

How to Perform OCR Scanning with Google Lens

How to Transcribe using Google Recorder?

Once you have installed this app on your smartphone you can then start using all of its features. This means that you can use the live transcribe feature of Google Recorder right away. And in order to use this feature, you can follow the given steps:

How to Search in Google Recorder?

Related: How to Install Pixel 4 Google Camera on Any Android

How to Use Google Recorder in Offline Mode?

You can find the major features of this app in this article. As a result, you can easily enjoy its live transcription and web search features. So, if you want to use one of the best voice recording apps for an Android device, make sure to install Google Recorder using this article.

How to auto disconnect from Internet Explorer?