Let us see how we can compare the Apple Watch SE and Apple Watch Series 3, and choose which one is suitable for your need.

These are the major changes that you could keep in mind before picking a side on choosing the new Apple Watch. The rest of the features, well, most of them, stay the same and we will explain them to you here.

Which One is More Stylish

When you are spending a couple of hundred bucks on a watch, you must be expecting a stylish appearance. Well, there’s no smartwatch that could give you the style of old-school dual chronograph classic style watches. Apple Watch is no different, yet they are stylish in their own way. 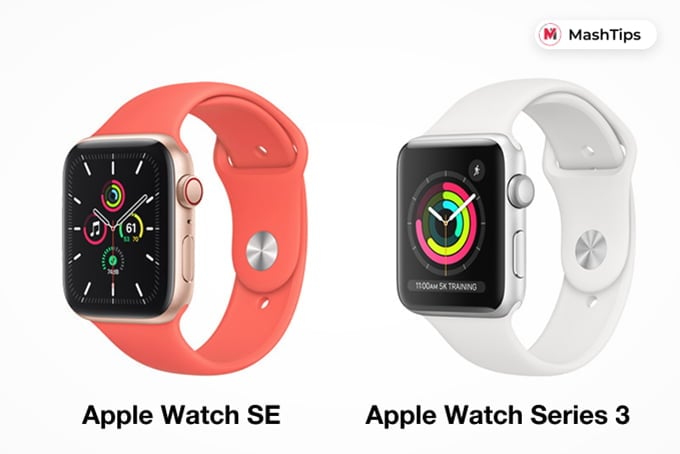 Apple Watch SE and Series 3, both come with similar design elements (which is the Apple Watch signature design that is here to stay for a while). But, take a closer look at both and you will start to sense the changes. 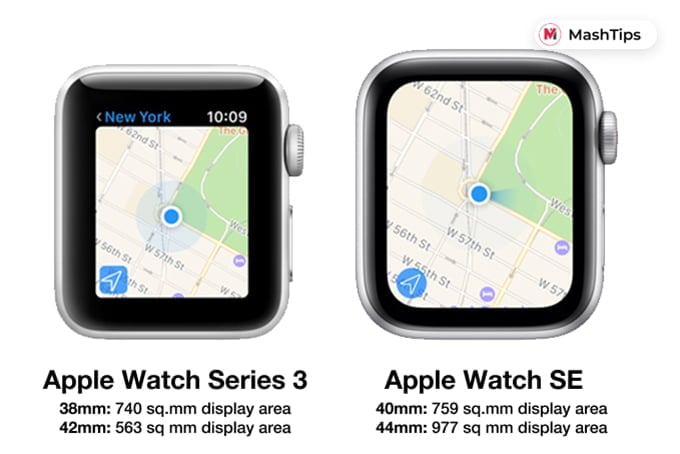 Starting from the display, the older Apple Watch Series 3 comes with a rectangle retina screen, that may look a lot like some Chinese counterparts at least in 2020. On the other hand, Apple continues to develop the iPhone-like curved corner screens (squircle-shaped) for Apple Watch SE, which they have been using since Apple Watch Series 4.

The casing size for both the watches is different too. While the Apple Watch SE offers larger options of 40 mm and 44 mm, the Series 3 has 38 mm and 42 mm case size. Both come with aluminum-made cases. While buying a new Apple Watch for your kids, Series 3 with 38 mm casing would be a better match than the bulky 40 mm or 44 mm offered by Watch SE. 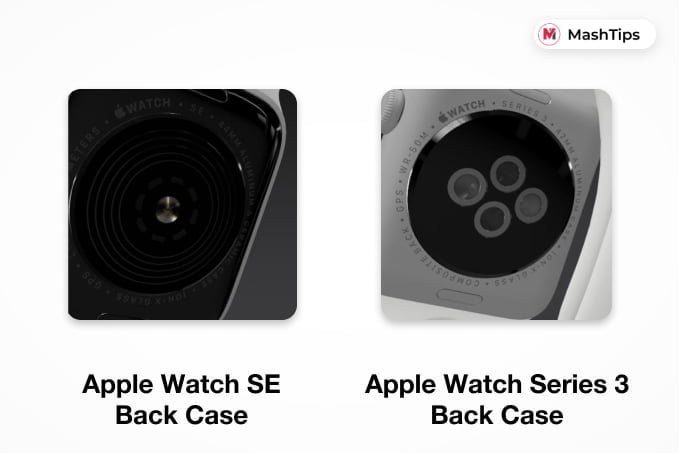 Luckily, Apple hasn’t changed the watchband sizes and quick-release method. You can use any watchband from Series 1 to Series 6 is either of the watches. You can even use the all-new SoloLoop watchband for Apple Watch Series 6 on both Series 3 and SE.

While the Apple Watch Series 3 comes in Silver and dark gray colors, Apple Watch SE gets an extra gold color option as well.

Which One’s Faster (and Future-proof)

Choosing the better performing, the faster model is not just applicable for phones or computers. Apple Watch is basically a mini version of a computer on your wrists, so the performance matters.

Looking at the technical side, Apple Watch Series 3 hosts the S3 SiP chipset from Apple. It is capable of handling most of the apps and does not put you down in the day to day usage. The S5 SiP chip on Apple Watch SE is taken from the Watch Series 5 and Apple say it’s 2x faster than the former.

The difference in performance can be reflected in day to day usage as well. As of now, Apple Watch Series 3 can perform just as nearly as SE, however, the future updates may slow down the Series 3 and it will eventually miss out on features.

Related: Do I need 8GB or 16GB RAM MacBook Pro?

What Features Do I Need

When it comes to health monitoring and personal care features, Apple Watch SE is a cut above. Fall detection is one thing you can get on Watch SE, and not on Watch Series 3. Well, if you are thinking if it’s a thing, it had helped many in the past. 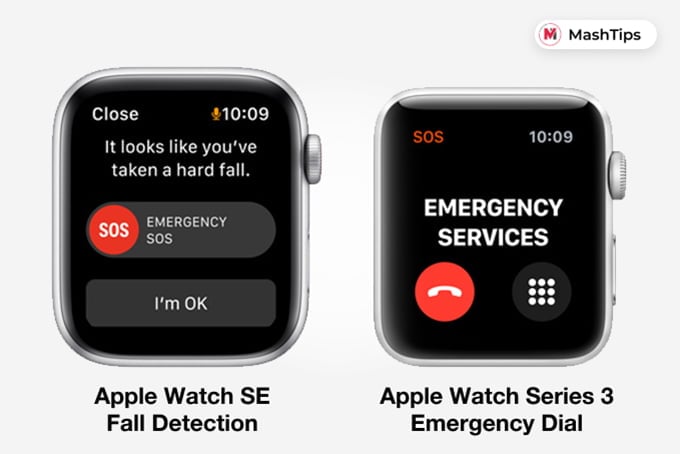 Emergency SOS is available for both the watches. In fact, Apple Watch SE takes the advantage of Cellular supports and allows international emergency dialing.

Series 3 does offer a GPS variant only, which is a major turndown if you are looking to use the WatchOS 7 features like Family Setup. You need a Cellular Apple Watch to setup Watch for kids or the elderly who do not have an iPhone using Family Setup.

Heartrate monitoring in Apple Watch SE is slightly faster and accurate compared to that in Series 3. Same with the sleep tracking, the new accelerometer with 32 g-forces in Watch SE can measure your sleep time more accurately.

For the hiker in you, the builtin Compass and always-on altimeter on Apple Watch SE is, for sure, a favorable part. You can also add the real-time altimeter complication on the Watch face in Watch SE. Apple Watch Series 3 lacks both, but there is an Altimeter that you can use manually. For the best part, both are waterproof up to 50 meters depth. 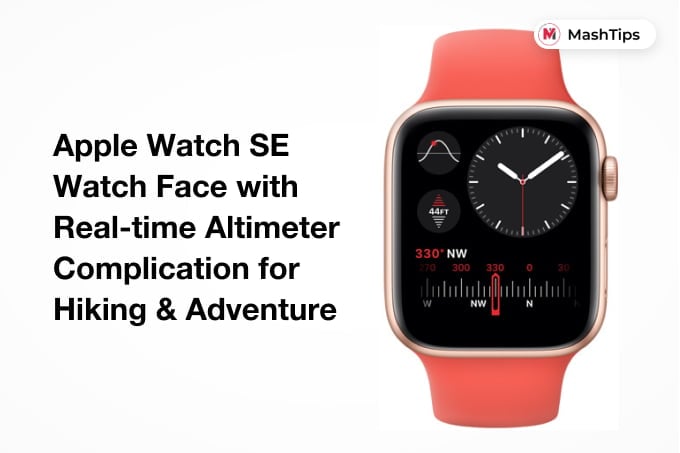 Both the budget-watches from Apple can warn you about irregular heartbeat rhythms and can assist you to get help if the heart rate goes up or down too much. Also, the microphone on Apple Watch SE can detect noise pollution with the Noise app.

Don’t worry. We didn’t miss the storage part. If you are someone who tends to install too many apps, watch faces, create new memojis, and download songs from Apple Music on your Apple Watch, pay attention. Apple Watch Series 3 comes with only 8GB of storage. On the other hand, Apple Watch SE sports 32GB of storage which is 4x bigger compared to the Watch 3.

You are fascinated about the new series of Apple Watch wearables, but don’t want to spend too much on something that is “basically a watch.” That’s why we are discussing this here. Let’s look into the price tags both Apple Watch models come with.

Despite its old chipset and features, Apple Watch Series 3 comes with a marginally lower price tag. You can buy it for $199 or cheaper online and would be the best suit if you are buying for your kids.

If you are ready to spend a few more dollars, you can buy Apple Watch SE with updated features and relatively long-time software updates and support. The Cellular variant of Apple Watch SE costs nearly as twice as the Apple Watch Series 3, which may not be worthy of it if you don’t necessarily need the cellular options.

Why Should I Buy Apple Watch Series 3

We know that you are a little confused here. Match your mind with the list below and see if you are;

Why Should I Buy Apple Watch SE

If your mind is still stuck with the newest models in the Apple Watch lineup, here it goes. You can go definitely go for the new Apple Watch if you are;

Apple Watch Series 3 comes with all the basic functions and features, as same as the Watch SE. You will miss out on some features from Apple Watch SE but worth the deal if you are looking for a budget watch.

Running lots of apps on both would be just fine, but the Watch SE will outperform the older one. Even if you buy the Apple Watch Series 3 now, we can expect the watch to get the WatchOS updates at least for a couple of years from now. But, do not expect the same performance over time.

Can I use SoloLoop Band on Apple Watch Series 3 and SE?

Definitely yes. Apple Watch Series 3 and Watch SE are compatible with any iPhone model, that is newer than the iPhone 6s and running on iOS 14 or newer.

Is it worth buying the Apple Watch Series 3?

Yes. Apple Watch 3 and newer models are waterproof up to 50 meters.

Can you wear Apple Watch to bed?

Can I shower with my Apple Watch?

Apple Watch is made to withstand most of the watersplashes and dip. But, we do not recommendign wearing the watch to the shower since we cannot expect it to withstand all forces of water everytime.

Can I use Apple Watch as a health tracker?

Apple Watch comes with loads of health-focused features including heartrate monitor, ECG, Blood Oxygen monitor, etc. But, you cannot rely on the Apple Watch results to make decision on your healthcare.

Getting a new Apple Watch means a lot for the iPhone users. You can get most of your iPhone apps right within the watch and even send texts from the Apple Watch. Hope you made up your mind in choosing the best Apple Watch right now, between Apple Watch SE and Apple Watch Series 3.

How to Turn On Low Power Mode on Apple Watch

How to Create Custom Animated WhatsApp Stickers on Android and iPhone