Do I Need New M1 MacBook Air or MacBook Pro: How to Choose the Right M1 MacBook

Read our complete buying guide to make the right decision before buying the new MacBook Air or MacBook Pro.

As we all know, Apple MacBook Air and MacBook Pro fall under different categories of users, even though they share a plethora of features. Apple just replaced the Intel processors with all-new M1 chipsets. That means you get better performance with both the MacBook Air as well as MacBook Pro.

It was all about i3 vs i5 or i5 vs i7 when it came to the MacBook Air vs MacBook Pro. Well, not anymore. Apple just replaced both the MacBook lineups with substantially powerful M1 chipsets, yes the same ones. Running on similar chipsets (with slight differences) you must be expecting the same level of performance with both.

Apple ships both the MacBook Air and MacBook Pro with an M1 chipset, that packs CPU, GPU, Neural Engine, and I/O in a single chip. Since they both share a similar set of specs, all we expect is a performance without any bar.

The 8-core CPU in MacBook Air and Pro works similarly, but thermal management plays a major role in the performance showcase. Most apps on both MacBook Air and MacBook Pro M1 get a smooth launch without any notable delay in between. But, if you continue to work with the CPU-oriented tasks for a longer time, the lag gets more noticeable.

In case you are unaware, the CPU cores and clock speed alone do not define the performance of your system. The heat management system should be pretty much enough to keep the system cool, otherwise, it will burn the whole chipset. So, it seems Apple did some workaround to keep the top-notch performance of MacBook Air even though it sports the same chipset as MacBook Pro. 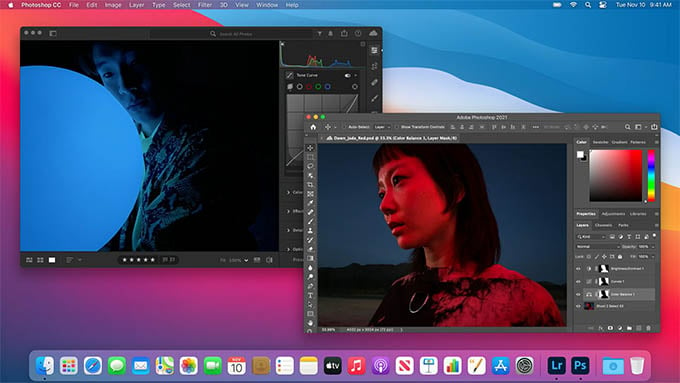 We put the latest Adobe Photoshop CC 2020 on both the MacBooks. They were pretty much the same in launching the apps and running functions, and at times both were performing far ahead compared to the older Intel-based MacBook Air or Pro.

Next up is the Final Cut Pro, which is likely to take the lion’s share of CPU and GPU cores. The editing part was smooth, with a 30 minutes 4K video on the timeline. We did not feel much of frame skips or jumps in the previews – thanks to the 8-core CPU in the M1 chip. 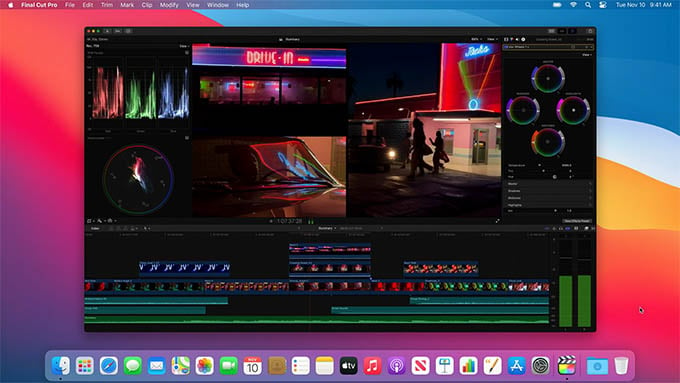 The things will be a bit different when you try to render lengthy 4K videos. This is where the actual fan in the MacBook Pro kicks in. The more the CPU gets cooled, the more it takes the best out of it. The aluminum heat spreader in the MacBook Air did not seem to be a great help. Yes, the fan-less design keeps the MacBook Air to run silent, but it is not what you want if you are to fully draw on with heavy tasks.

If you are buying the new MacBook for AutoCAD, 3D Modelling, 3D animation, VFX, and other cinematic purposes, MacBook Pro M1 is your machine. The GPU cores matter when you run graphics tools. But if you are a student or developer looking to polish your design skills with a low-power machine (and limited tools), MacBook Air also would do.

You must be already looking for the memory management comparison, and here it is. Both the MacBook Air and Macbook Pro M1 models come with 8GB integrated memory for the base models. You can get an upgrade up to 16GB for both as well. In case you are confused between the 8GB and 16GB variants of MacBook Air/Pro, check out our guide to choose between 8GB and 16GB MacBook.

There is no laptop that could beat MacBook models in battery life and efficiency. From the last year’s 12-hours backup, the new MacBook Air gets a major jump to 18-hours and the MacBook Pro gets 20-hours of backup in total. You are obviously not expecting the maximum range in everyday usage.

Apple’s tests show up to 17-hours of web browsing on MacBook Pro. On the other hand, MacBook Air will get around 15-hours of battery backup straight if you just surf through the web over WiFi.

Related: How to Check Battery Health on MacBook

Should I Buy MacBook Air or MacBook Pro

Before making up your mind based on the performance charts and analysis, keep some things in your mind. Make sure you are buying the right MacBook model that fits your need.

Check out the chart below to get a clearer idea of what tasks both MacBook Air M1 and MacBook Pro M1 can do.

Why Should I Buy MacBook Air M1

Confused why you should buy the new MacBook Air M1 right now? See if these match your requirements.

Why Should I Buy MacBook Pro M1

Here are the best reasons why you should choose MacBook Pro M1 over MacBook Air.

Who Should Choose MacBook Air

If you fall under the categories listed below, the MacBook Air is what you should choose.

Who Should Choose MacBook Pro

Are you still planning to buy the more powerful MacBook Pro finally? We have made a list of those who need a MacBook Pro over a MacBook Air.

You already got a clear idea about whether to buy the MacBook Air or MacBook Pro. This is not a one-to-one comparison to find out the best among them, but to help you choose the right one you need.

New MacBook Air M1 can, of course, compete well with the MacBook Pro. If you are a university student and can afford only the MacBook Air at the moment, you are not compromising on performance except on the GPU part. MacBook Pro, in fact, is a more powerful option (with a touch bar, too) if you are ready to spend a couple of hundred dollars more. Remember one thing, you might not need the MacBook Pro unless you are going to push hard through the limits of the new M1 chip, especially with the graphics, 3D, and rendering.

Hope you now have some clarity about the new MacBook Air and MacBook Pro. The MacBook Pro M1 is basically a slightly powerful MacBook Air with a bright display, touch bar, better cooling system, and a powerful GPU on board. At $999 ($899 for students), MacBook Air should be worth enough for most of your daily tasks.

How to Automate Your Christmas Lights with Alexa This Year

How to Automatically Switch Windows 11 Dark Mode Like macOS

How to Turn Off Apple CarPlay on iPhone and Car

How to Get back Start Screen boot in Windows 8.1 update 1

Best Paid and Free VPN for Android and iPhone Users